Robert Pattinson And Kristen Stewart Meet And Have An Ugly Fight 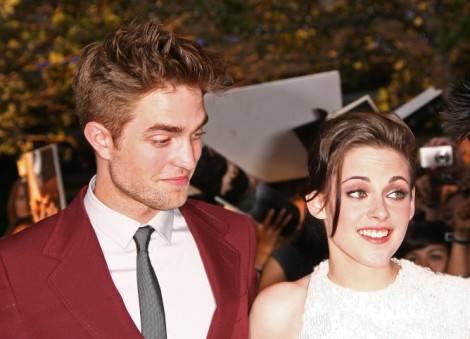 Perhaps Kristen Stewart and Robert Pattinson’s road to reconciliation wasn’t as smooth as we began to think. OK! magazine reports that just a month ago the Twilight twosome was at each other’s throats and couldn’t even stand to be in the same room together without getting into it. It got so bad they even needed moderators!

“They had a sit-down meeting with all their reps and lawyers last month,” a friend told OK!. “Kristen tried to speak to Rob but he ignored her, then one of his people stepped in and blocked her from trying again. She started yelling, saying he was being ridiculous, but he just looked at her like she was crazy. The last time they spoke Kristen made the fatal error of asking about his nights out with Katy and some of the other women he’s close to.”

Oh, snap! Looks like Rob’s attempts to make Kristen jealous by being linked with every available girl under the sun worked! But these histrionics are a bit much, don’t you think? I thought we reached some headway in the whole “Rob and Kristen hate each other” saga. Clearly OK! didn’t get the memo or is refusing to give up on the golden goose gossip story of the summer.

I think OK!’s just late on the draw. It had no idea that Kristen’s people were going to make it known at TIFF that the couple was back together. Remember when I asked you guys when you thought the reconciliation took place? Can we play along with this story and imagine Robert and Kristen hugged it out after this dramatic meeting but then Kristen refused to let go and sobbed in his forgiving arms until he agreed to give her another shot. Maybe? Maybe not? Because I believe my sources over OK! magazine and if they tell me Rob and Kristen are back together than they’re back together.

Although I did read something from some other site yesterday that argued the joyous news could be a ploy just to get Kristen back into her fans’ good graces before Twilight: Breaking Dawn Part II hits the big screen. Would Kristen do that? I know Summit would, but would Kristen? And better question, would Robert? He owes her nothing. If he’s as worried about what his fans think as much as I’m hearing then why give the OK for Kristen’s people to release the story? It seems you can’t do anything without alienating at least one faction of the Twihards and Rob forgiving Kristen is not in his best interest. I can only believe Kristen is spreading the story because it’s true, but I’m naive and a sucker.

Isn’t it nuts how political the status of this couple is? I suppose millions are resting on it but, let’s face it, Twilight will do well if Rob and Kristen kiss and make up or duke it out in front of their lawyers and reps. Magazines, on the other hand, tend to perform better when celebs violently hate each other so I’m sticking to my guns. Rob and Kristen FOREVER!

Do you still believe Rob and Kristen are secretly dating again or could the reconciliation just be a plot to spin Kristen’s image? Is the meeting scenario described by OK! realistic?