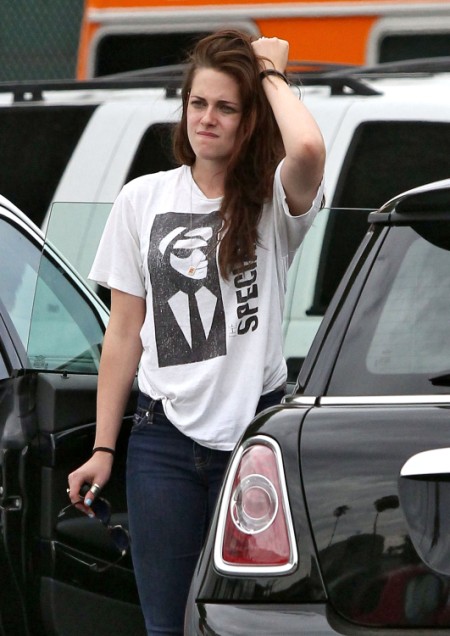 This is the problem when you cheat. After you do it once, everyone thinks you’re doing it all the time. Such is the case with Kristen Stewart and Robert Pattison in their latest installment of the Two-Timing Saga: Breaking Hearts. In a paranoid, jealous rage, Rob is freaking out at Kristen for seeking solace with her male friend and harassing her motives for staying at his house.

Rupert Sanders was so last week. Rob is accusing Kristen of cheating with her Welcome to the Riley’s producer, Giovanni Agnelli, since she’s been holed up at his place after she found her parent’s house to be less than cozy or forgiving.

“Rob knows Agnelli and has been calling him a lot since Kristen has been there,” an insider Radar Online. “He wants to know why Kristen is staying there at his house. He is super angry now and has accused Giovanni of sleeping with Kristen too. Giovanni got a call from Pattinson around four this morning, threatening him if he has been sleeping with Kristen. Rob is beside himself over Kristen’s betrayal. No one has ever seen him like this.”

I doubt Kristen could be that stupid! Banging a new guy isn’t exactly the way you go about getting your very angry, and very hurt boyfriend back into your trust. And seriously, if Kristen’s as hygiene-challenged as we’re hearing, why would Giovanni touch her at all? Her presence at his place does explain all the rampant tweeting though. Giovanni has been one of the only vocal Kristen Stewart defenders and has taken to twitter to try to single-handedly convince the world she never had sex with Rupert. Was Kristen behind the tweets? Maybe she finally caught on that her PR people are inept and decided to do some damage control on her own. Can’t say it worked, can you?

Do you think Kristen’s screwing her producer or is she just taking refuge with a friend? Do you blame Rob for his paranoia or is he taking his grief a little too far now?