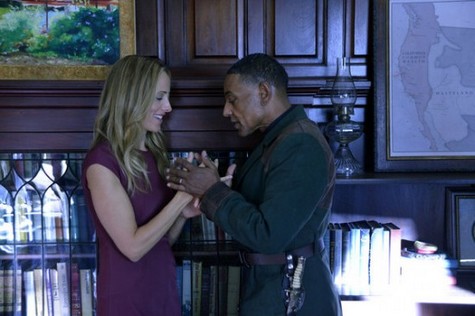 Tonight REVOLUTION returns to NBC with a whole new episode called “Ties That Bind.”  On tonight’s episode when Nora encounters a close relative, she must make a difficult choice between family and a promise.  Did you see last week’s episode?  We did and we recapped it here for you!

On last week’s show in order to save Nora from her injury, Miles leds the gang on a detour to visit an old acquaintance of his for medical support, but they quickly found themselves in unfriendly territory. Aaron recalled his meek history as he looks back at his pre/post-blackout life, and Neville delivered Danny to Monroe. Tracy Spiridakos, JD Pardo, Maria Howell, Tim Guinee and Elizabeth Mitchell also starred in last week’s episode.

Tonight’s episode is going to be great and you won’t want to miss it. So be sure to tune in for our live coverage of NBC’s Revolution tonight at 10PM EST! While you wait for our recap, hit the comments and let us know what your think of Revolution season 1, so far? Check out the sneak peek video of tonight’s episode below.  Hit the comments and let us know your thoughts!

Our little band of outsiders is perched near a bridge in Pennsylvania that’s loaded down with militia soldiers. They decide to be straight forward and head onto the bridge. Miles decides it’s a trip and tells everyone to run on his signal. Sure enough, it was a trap. It’s the assassin Strausser that Monroe sent to retrieve Miles and the necklaces.

The group gets away, but just barely. Miles and Nora recognize Strausser and tell Charlie and Aaron that he’s a killer. Miles says Strausser’s the only guy who’s ever scared him. He tells the group they’re in trouble.

The soldier who went chasing Miles has to report back to Strausser that they lost them and he rewards him for the news with a knife in the stomach! Strausser tells them to bring out the girl. A red flare is shot into the air and shouts echo through the night saying “Nora, help Mia.”

They group peeks out to see the militia has a girl tied up, a prisoner. Nora tells Charlie that it’s her sister. We get a flashback of Nora and her sister hiding under a bed during a raid after the lights went out. The next day, Nora finds her mother dead.

Monroe tells him Nate’s being punished for trying to find out where Strausser was going. Tom says it’s because he has a weakness for a pretty face. Monroe offers Tom the choice of sending his son to an outpost in California which is quite dangerous – or face death there.

Nora and Charlie rig an explosion that distracts the militia. In the hubbub, they cut down Mia and head off with Strausser not far behind. Mia tells them she knows another way to get where Danny’s is held and they head out, hiding from militia patrols.

Back in the past, Nora and Mila try to find their dad now that their Mom is dead (which young Mia doesn’t know). She finally has to tell her sister that their Mom is dead and Mia’s devastated. Back in the present, Mia tells Nora she found their Dad alive in Texas. She says he was headed in another direction to look for them so that’s why they never found him. Mia says their Dad is grey and cranky, but okay.

Mia alludes to some great wrong that Miles did Nora, but it’s not explained. Nora tells her she promised Charlie she’d help rescue Danny. Mia begs her to leave the Monroe Republic and come back to Texas with her. Nora refuses, but Mia says she’ll get them across the river safely before she goes.

They get to the river side where Mia’s mule friend is that can help them cross, but they find him dead out in the open. Miles reckons it’s Strausser that killed him and they’re unsure what to do from there.

At their nice fancy house, Tom and his wife Julia have a chat. She brings in a maid to tell Tom that their neighbor’s son is mixed up with the rebels. She offered the tidbit up so Tom can hopefully use it to save their son Nate from being sent away.

Mia begs Nora again to come with her to go to their Dad in Texas. Mia says she can’t do it alone and that Nora won’t come back alive from the rescue attempt. Charlie tells her to go with her sister – that she can’t stay with them over her sister. She tells her she would give anything to be with her Dad again, so Nora has to go. Nora kisses Miles good-bye passionately and tells him she’ll see him around. He tells her he doubts it – that they’ll never see each other again. Nora tells him that’s what he said last time.

Monroe and Tom are torturing John – Tom told him about his son being in with the rebels. Although they were estranged, they killed his son as a preventive measure. Monroe tells him he won’t send Nate to California, but warns him to keep Nate in line.

Nora and Mia are on their way to Texas making small talk. Suddenly they’re surrounded by Strausser and his men. Mia walks up to him and hands him one of the necklaces and tells him where to find the others. They seem to be old friends. Strausser agrees to uphold his end of the bargain and let Nora and Mia go free. Nora is horrified and asks her sister what she did. Strausser tells her she just saved her life and heads off after Miles and company.

Mia confesses she’s been bounty hunting for the militia for the last year. She tells Nora that Strausser made her betray them. Nora wants to know if their Dad is really alive and Mia says he’s not. Nora’s furious because her friends helped her rescue Mia even though it was at great risk to them. Nora tells Mia to get lost and not follow her. She heads off at a run after Miles to try to save him with Mia shouting for her to come back – that Strausser will kill her.

Aaron realizes the pendant isn’t in his pocket. He and Miles begin to argue about it when they’re suddenly under fire. Strausser tells him to come out, that they’ve got nowhere to go. Miles tells them to hold fire and he prepares to surrender. Nora sneaks up and stabs one of the soldiers in the back – it looks like it was Nate, Tom’s son… Not sure…

Strausser has Miles hand over his swords. Miles calls him a psychopath and says he was locked up in a rubber room before the black out. He orders Miles cuffed and then gunplay erupts. Nora shoots everyone but Strausser and runs to help Miles. He tells her he knew she couldn’t stay away. He goes to shoot Strausser but it’s just a click – he’s out of ammo.

He bests Strausser in hand to hand, but doesn’t have time to kill him. More back up is arriving so they flee, but are at a small waterfall at a river’s edge and have to jump into the churning water. They survive the impromptu swim and Aaron and Miles have a confab over the missing necklace.

Miles said if Monroe figures out the necklaces, he’ll be weaponized and the rest of the world will be his victims. Miles said Aaron should have known the girl had a hand in his pants. Aaron is ashamed, but angry and tells Miles to get out of his face.

Back in the present at militia HQ, Strausser reports back with the pendant and offers it to Monroe. He tells Strausser he’ll make sure he’s properly rewarded (that sounds foreboding). I was right – it was Nate that Nora stabbed. He’s bedridden with a bandage around his abdomen and his mother is caring for him.

Julia wants to know if Monroe is unstable. She says he’s changed since Miles left and she worries that he’ll hurt Tom. She says he’s not fit to lead. Tom tells her to never say it again, but she presses on. Julia tells Tom he shouldn’t underestimate himself – that there’s no limit to what he can achieve.

Also at HQ, Rachael is working on something when Monroe brings her a necklace. She wants to know where he got it and he won’t tell her. He tells her she has everything she needs now. In her prison, Randall (the army guy who wanted to weaponize the pendants back in the day) comes and gets Grace to show her that one of the pendants looks to be in Monroe’s hands. She asks what he’s going to do about it and he tells her that she’s the one who has to do something about it.