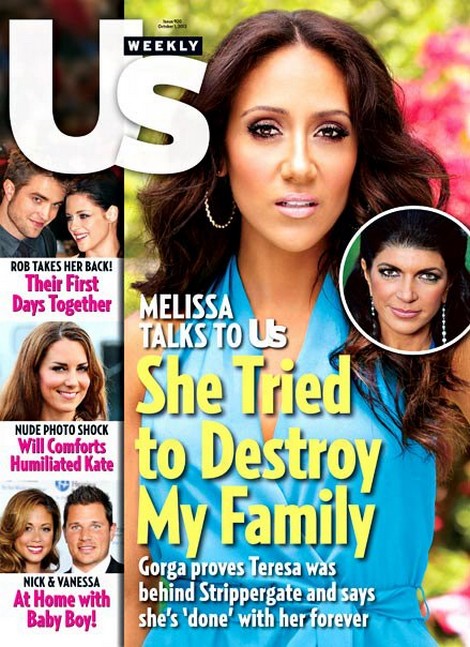 The current issue of Us Weekly features the cover story “Melissa Talks To US – She Tried To Destroy My Family.”  The latest episode of The Real Housewive’s of New Jersey was the beginning of the end for Melissa Gorga and Teresa Giudice. The sisters-in-law had called a truce on their long-standing feud and things seemed to be going really well as it ever so briefly appeared that the Gorga’s and Giudice’s might mend family fences once and for all. Then Strippergate happened and I think any hope went right out the window.

Melissa Gorga sits down to talk with Us Weekly in the latest issue and she dishes on how she truly believes that Teresa set out to destroy her and her family. Teresa had a (supposed) chance meeting with a man who claimed that Melissa danced for him a number of years ago. This man, Angelo, later meandered up to Melissa to say hello to her in front of the entire RHONJ cast. It was an encounter that clearly unsettled Melissa and now she claims that she can prove that Teresa arranged the whole thing.

Also in the new issue you’ll find details on the reconciliation of Rob Pattinson and Kristen Stewart. Learn about their first few times together after months apart. Rumor has it that the couple is living together on the DL once again. Apparently being trounced by a home wrecking cheater and having his heart smashed to pieces wasn’t enough for him. He needs to give her another opportunity to publicly make an ass out of him before he’ll learn his lesson I guess.

Prince William is said to be working overtime to comfort his wife, Kate Middleton, in the midst of the topless photo scandal that is rocking the Royal family. The latest issue has more details on how he is helping his wife of 18 months cope. Grab yourself a copy now!