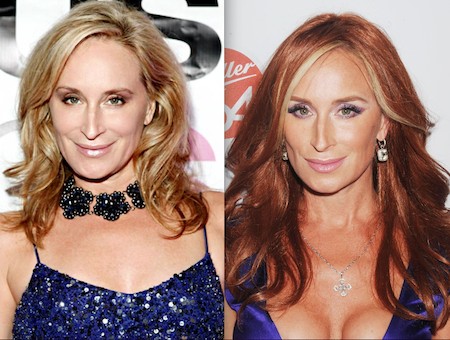 Real Housewives of New York star Sonja Morgan is good friends with rookie co-star Aviva’s Drescher’s ex-husband, Harry Dubin, and Aviva has made it clear she is not happy about it. After last night’s episode, Aviva took to her blog to let the world know how she feels.

“On the note of ugliness, it appears that Sonja is also experiencing problems with her ex-husband,” writes Aviva. “According to Sonja, he has also allegedly failed to stand up to his contractual responsibilities to their daughter. How would Sonja feel if someone in her circle was gallivanting around town, drinking, and partying with the dishonorable father of her child? I would never even speak to such a man. Sonja’s running around New York City with Harry and showing off about it is utterly shameful. Sonja knows exactly what is going on behind-the-scenes and should work to empower women instead of supporting the men who neglect responsibilities to their children. I have started to question her moral compass.”

Sonja has yet to respond to Aviva’s statements. Maybe she has more important things going on, such as a completely brand new look, as seen on the GLAAD red carpet last night!

What do you think? Personally, I think she looks like a whole new person! It is a dramatic change, but a good change, in my opinion.

See the above picture for the before and after look to compare.