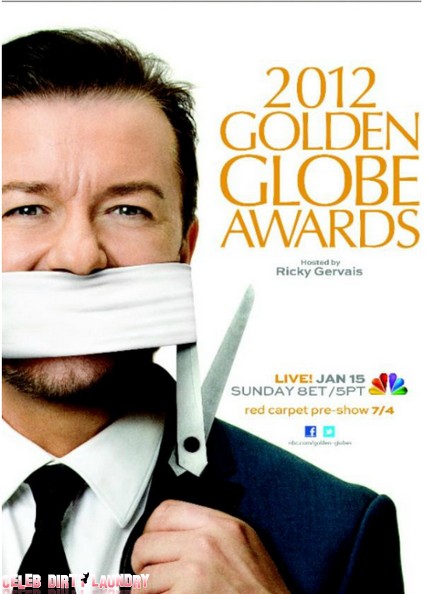 Beware Hollywood – that’s the message from Ricky Gervais ahead of his third outing as Golden Globes host. The British comedian says the jokes will be ‘uncensored‘. That should get a few big names a little hot under the collar with just over a week until the big night.

After last year’s controversial jokes at the expense of Tinseltown’s who’s who… Gervais said he wouldn’t be back again. But what do you know? He was the most popular host they’d ever had and Organisers wanted him to return. The man who created The Office finally gave in but on one condition – no censorship!

He admitted that 2010 was not his best effort ‘I got it a bit wrong I think the first time. I tried too hard with the shtick, the comedy, and I should have just gone out there and done zingers. You know, you’ve gotta grab their attention. It’s not a great place for a comedian to play because they’ve got other things on their mind. They’re there to see if they’ve won an award, but they don’t wanna see this guy come out and telling jokes. Certainly not jokes at their expense.

The stars may not want to hear the jokes – but we do. Bring it on!