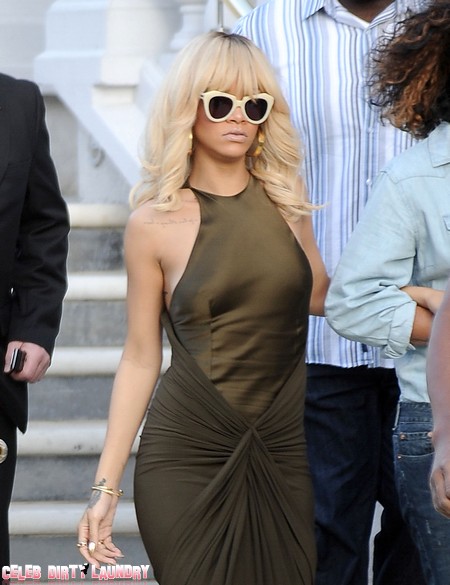 Rihanna has denied that she dating Ashton Kutcher, Demi Moore’s estranged husband while being quizzed on the subject at a London press conference for new the movie Battleship.  Friends close to Demi say that she is losing her mind over Ashton’s latest display of total disregard for her feelings.  Demi was driven to drug abuse, anorexia and skeletal thinness, and eventual institutionalization over losing Ashton to a string of infidelities – most famously with Sara Leal.

Rihanna was filmed leaving Ashton’s Los Angeles pad at 4am after a suspected 4 hour sex-marathon earlier this week.  Nevertheless Rihanna thinks that she is a citizen above suspicion and so got nasty when one reporter asked whether Ashton would be visiting her in the UK.

According to MTV News, Rihanna’s face “dropped” and she said:   “Wow, how disappointing was that question. I’m happy and I’m single, if that’s what you’re really asking”.

The statement contradicts evidence that Rihanna has been dating Ashton for eight weeks and even introduced him to her young brother Rorrey.  Demi is being destroyed by jealousy… again.

A source told Grazia magazine: “Demi is constantly keeping tabs on Ashton so when these pictures came up she was understandably devastated. Demi’s convinced something happened between them and said she felt ‘sick to her stomach.’”

‘Demi’s been acting crazy ever since, trying to find out information about the pair. Demi is in such a fragile state, even the idea of them together has affected her quite badly. She’s in a terrible way but, at the end of the day, Ashton is a single man and free to do whatever he likes.”

A source told Closer magazine:  ” Demi can’t believe Ashton would do this. She’s really hurt by the rumours and feels humiliated he’s being linked to other celebrities just a few weeks after she got out of rehab. She feels it cheapens their marriage even further”.

Rihanna’s denial of her affair is to be ignored – the facts and the evidence contradict her.  When Rihanna says that she is single she just means she can sleep with everyone whoever she likes.