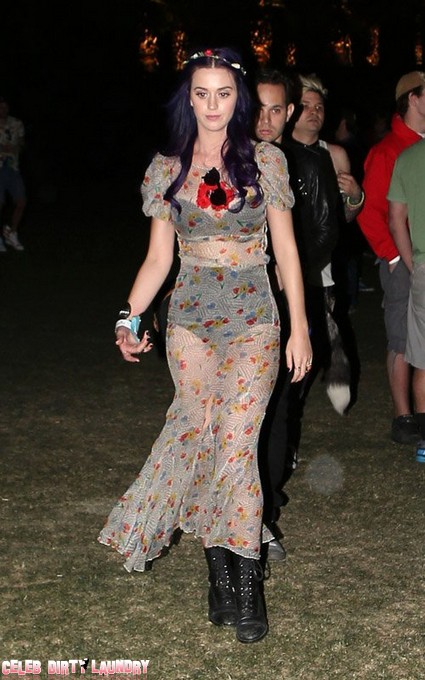 Hollywood is a ghost town this weekend. The beautiful people and biggest pop stars on the planet are hanging out at Coachella in California. That’s because it is weekend one of the World’s biggest music festival. Anyone who is anyone is  at Coachella. Celeb Dirty Laundry has been keeping a close eye on which famous faces are letting their hair down this weekend.

There was plenty of star spotting on Day 2. Katy Perry was looking very goth and a bit pale after going back to her dark roots. She also had the requisite hippie threads. She looked a little lonesome next to the super cute husband and wife Fergie and Josh Duhamel. Rihanna made an appearance. The S & M singer gets around. She was in Australia less than a week ago. Also enjoying the music was Twilight star Kellan Lutz, former ‘it’ girl Mischa Barton, actress Kate Bosworth, former star of The Hills Lauren Conrad and the always glam Paris Hilton.

You almost forget there’s a show on stage as well. Music acts on day two included British superstars Radiohead, Bon Iver,  the Kaiser Chiefs, Noel Gallagher‘s High Flying Birds and Kasabian. And with the performances streamed live on the net people all over the world are tuning in to hear what’s happening at Coachella. Enjoy the pictures from day two …

Check out the Celeb Dirty Laundry Coachella report from day one as well. We have it all covered : Coachella Music Festival – Day 1 (Photos)