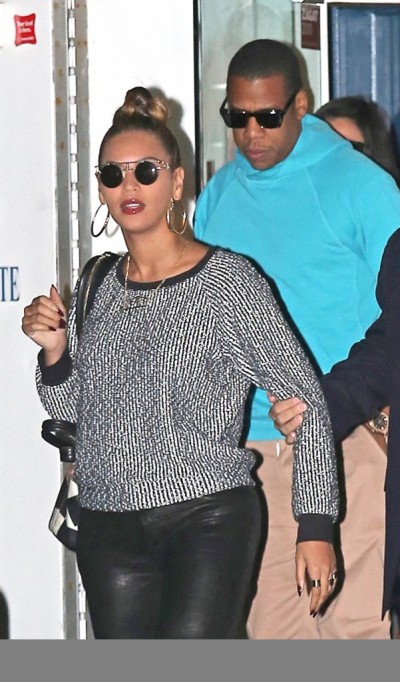 Not many people can bitch slap Jay-Z and get away with it but Robert De Niro isn’t most people. Both men were at Leonardo DiCaprio’s birthday party the other night but De Niro wasn’t only in the partying mood. He felt like doing some scolding because he made Jay-Z and offer he couldn’t refuse but Jay-Z did it anyway. I guess De Niro reached out to Jay-Z to record a song for the Tribeca Film Festival but Jay never called him back. How do you not call back Robert De Niro? That either takes balls or stupidity. I’ll go for the latter.

“Bob wasn’t in any mood to make polite conversation,” the spy told Page Six. “He told Jay that if somebody calls you six times, you call them back. It doesn’t matter who you are, that is just rude. De Niro kept telling him that he thinks he’s the man, but that he was disrespectful. Beyoncé came over, but that didn’t calm Bob down. It was the talk of the party. Everyone was saying there’s only one star in New York bigger and badder than Jay-Z, and that’s Robert De Niro. He can be quite scary when he’s angry.”

I love how Beyonce came to talk Rob down and make excuses for her husband but he was all like “I’m not finished yet!” How do you save face after something like that? How do you mingle around the room and try to act like nothing just happened? You just got scolded like a three-year-old girl by the Godfather and the gay pirate in Stardust. My face would be red for days! But it’s great because it still shows that De Niro’s got it. He doesn’t care who you are. If he calls, you pick up the phone. Maybe he was in a bad mood. Maybe he’s sick of the young couple talking about Blue Ivy. Whatever it was, he obviously couldn’t rest until he got something off his chest and Jay got served.

Do you think Robert De Niro and Jay-Z will be collaborating anytime soon? Does De Niro need to check his crotchitiness at the door or can Robert De Niro fight with whoever he damn well pleases?