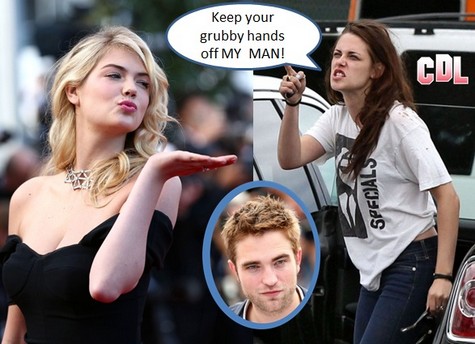 Kristen Stewart shattered poor Robert Pattinson’s world by being embroiled in one of the most polarizing cheating scandals in recent Hollywood history. Pattinson doesn’t require much more in order to bag the ladies like a kid bags stuffed kittens at a carnival playing Shoot Outs. Sports Illustrated supermodel Kate Upton has been one of the latest names to be linked to Pattinson. Let’s all say, “Good on you Patz!”

According to Life and Style magazine, when Upton was asked if she’d ever date the heartthrob, she answered, “I might be a little scared of a vampire, but yes, he’s cute!” Oopsy daisies! Did Upton just play the “cute” card? Remember guys and gals, cute is one word away from hot – or so we told ourselves when the girl with the twitchy eye left us for Boris the Russian stripper, after she proclaimed our cuteness to the world.

Life and Style reports in this week’s issue that friends close to Pattinson are super stressed out that the Twilight star will get back and heavy with Stewart, after she’s been texting him non-stop. The desperate Stewart has also been sending Pattinson love letters, written in pink pen, smelling like lavender and the sweat of a desperate cheater.

We think, in our humble wisdom, that Pattinson and Upton should connect like a romantic comedy. Firstly, Stewart would attempt to claw Kate’s eyes out in a jealous rage, which would be one of the movie’s highlights. Secondly, Pattinson deserves someone better this time around and a supermodel fits with the actor, not a washed out wannabe who became the cliché we always knew she was. Hopefully, Pattinson doesn’t hand Stewart the “Get out Of Jail Free” card, but rather passes “Go!” with a hot model at his side.

If we were you Pattinson, we would let Stewart stagnate on the brown blocks, because no-one ever lands there and they’re cheap, like her.

Let us know in the comments below if you think poor Pattinson would make a great BF to Upton.