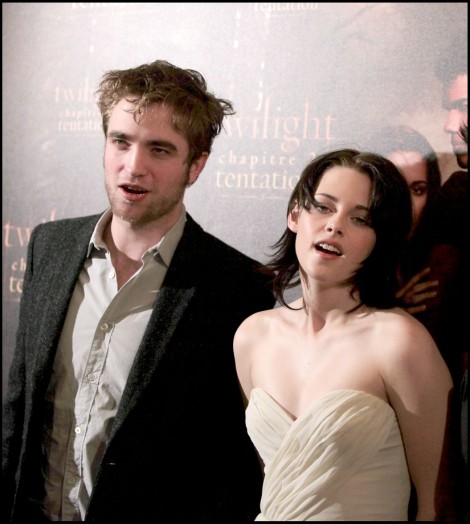 That reconciliation was just in the nick of time because the international promotional tour for Breaking Dawn – Part 2 was just announced and Kristen Stewart and Robert Pattinson will promote the film together in some key cities. Oh ya, Taylor Lautner will be there to annoy everybody by standing in between them. Thanks Taylor!

According to Deadline, Rob and Kristen will go their separate ways Oct. 21- 28 with Rob visiting Australia and Kristen in Japan but they’ll reunite in Los Angeles for the press junket the week after. Then the couple will take their show on the road and promote the film together first in LA and then England, Spain and Germany. Taylor will be with them every step of the way which isn’t something new – he is one of the stars – but it will be interesting to see how they use him this time. In the beginning, he always acted as a wall between the two and the dating rumors but then they went public and kind of shelved him to the side. I have a feeling Kristen and Rob will be making a Taylor sandwich again for the cameras.

So are we surprised the couple will be together? How could they not be? This movie is huge and they are the stars. Even if they weren’t having no sex to save their relationship they’d still be expected to play along for the publicity tour. That’s just business. But are you getting the feeling that the the reconciliation was staged because of this timing? Or do you think the couple rushed getting back together because they knew this red carpet experience was going to be hell if they were still fighting? I’m not saying their relationship isn’t true but I can’t help but think Rob jumped back in so fast because of the upcoming schedule. It just makes things easier for everyone, right? Are you as excited as I am to see Robert Pattinson And Kristen Stewart together?