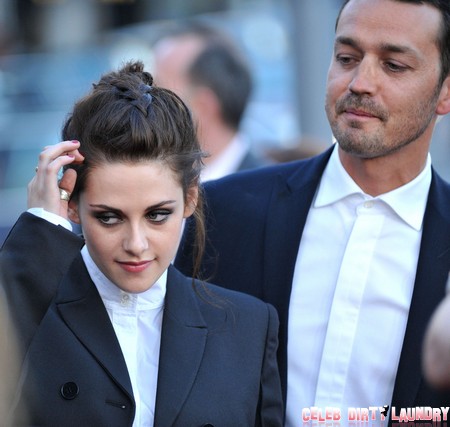 Newly reunited with his on and off screen love, Robert Pattinson is now trying to protect Kristin Stewart from the hate-fueled bile that’s splashed across the internet. Rob has ordered Kristin to stop Googling herself to avoid seeing what her infidelity with Snow White and The Huntsman director Rupert Sanders has caused.

A source close to Robsten says, “Kristen is hooked on Googling herself and seeing all the horrible stuff people write as a way of punishing herself. But Rob has told her she needs to stop torturing herself and move on.”

Now that Rob has decided to forgive her and move on, he wants Kristen to give herself a break. But it may be hard to do when she’s one of the most hated women on the web. Twihards were outraged with her tryst with the older married, father of two Sanders –calling her out on Twitter, YouTube and Twilight fan forums.

One especially vitriolic and tearful video rant titled “How Could You Do This Kristen!” has drawn comparison to viral smash “Leave Britney Alone” and has topped more than 2.8 million views. I wonder how many times Kristen watched it?

And it’s not just anonymous vamp fans that have gone after Rob’s cheating lover. Although it was tongue-in-cheek, Will Ferrell’s breakdown on Conan that culminated in accusing Kristen of being a “Trampire” has spawned t-shirts, bumper stickers and coffee mugs.

In the interim between Robsten’s break-up and make-up, Kristen’s weight has plummeted to a scant 100 pounds and she’s devoted her time to texting and calling Rob to beg for forgiveness and tormenting herself reading internet criticism of her affair. But Rob has ordered a stop to this virtual flagellation to allow them to move on with their lives.

What’s of particular interest to me is how little scrutiny Rupert Sanders has had to endure. He was her boss and nearly two decades her senior. Why is she carrying the brunt of punishment for the affair? If they had worked in a bank together, he would have been fired and she would be considered the victim.

Of course the obvious answer is that Kristen WAS about 10,000,000 times more popular than Rupert and happens to have been one-half of the most popular couple on the planet, worshiped by millions of Twilight fans.  This wasn’t about two people cheating at work on their significant others  – it was about Bella breaking Edward’s heart.  In fact Kristen tried for a split second to play the victim after she was busted – but this gained no traction whatsoever and so she wisely chose a different tack

Rob’s Google and Twitter ban could be the best thing for their fragile new relationship. As the Twilight finale release date nears, we can expect to see the happily reunited duo working the red carpet and getting hot and steamy on the big screen.

There’s no doubt that Kristen’s infidelity wasn’t her finest hour – whether she “went all the way” with Rupert Sanders or not – she insists it never got that far, preferring the euphemistic ‘momentary indiscretion’ to describe the affair. But if Rob’s decided to forgive her, is it our business to continue to condemn her? Is it time for the Twihards to give her a break? Or at least for Kristen to give herself one?