Robert Pattinson Flies Back To LA To Reunite With Kristen Stewart 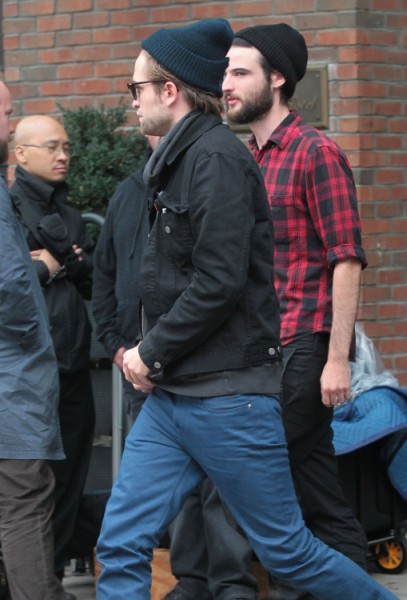 I’ve been nervous Twihards. Everyone’s been saying Kristen Stewart and Robert Pattinson are back together but there have been no pics. And not only that, they have rarely even been in the same country let alone the same coast since the rumored reconciliation. But rest assured! After partying it up with Sienna Miller and Tom Sturridge in NYC, Rob hopped on a flight back to LA to be with Kristen Stewart! A fellow passenger on the plane tweeted about seeing him.

That’s what you want to hear right? LA’s a pretty big city. He could be there for work, friends, a concert, meetings, etc. But Kristen’s there. She just went out on a date with her dad to see Florence and the Machine. So if he’s there and she’s there they have to be together, right? I mean, it’s common sense. It’s basically as simple as two plus two equaling four.

It must kinda suck to be Tom Sturridge right now. He’s the other dude in the pic above but the photo agency didn’t bother writing his name in the caption which is kinda ignorant. He’s engaged to Sienna Miller (which probably comes with its own slew of issues) and has a new baby and new exciting life and career opportunities of his own and he has to hang out with Rob. They’re besties so it’s unavoidable but being Rob’s friend has got to be hard right now with all the paparazzi and endless tears. I know all his friends were telling him to stay away from Kristen but at this point Tom’s got to be calling Kristen on the sly saying, “Listen, I already have one baby in the house. Promise me you won’t rip his heart out again and I’ll support the reconciliation. Just please get him back in LA!”

Maybe? No? Well all right then. So Rob’s hanging on the west coast until he has to fly to Australia for the first leg of promotions for Breaking Dawn – Part 2. I know Summit is probably telling the two to lay low and not get papped together until they walk the red carpet but if I don’t see a pic of them in this next week I’m going to start debating whether they’re even together or not. This is getting a little fishy. They were supposedly desperate for each other. How can that be when they never see one another? I’m telling you… something’s off!

Do you believe Robert Pattinson’s flying back to LA to be with Kristen Stewart or is he just readying himself for his trip to Australia?