Robert Pattinson Is Teased By Uma Thurman And He Likes It! (Video) 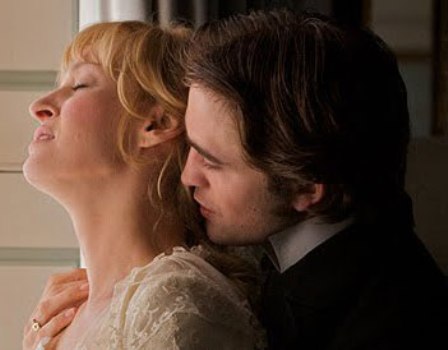 Robert Pattinson gets super sexy with Uma Thurman in the first clip released for their dark and sexually explicit film adaptation of Guy de Maupassant’s novel, ‘Bel Ami.’ In the not for kid’s video clip Rob becomes stymied by the outrageous and openly sexual flirting of Uma.  If this video is representative of the movie then Rob better NOT let Kristen Stewart see it – at least not if he wants to hang on to his relationship with her!

De Maupassant is renowned for his incisive and sad – but often bitterly humorous take on human nature.  His is not an optimistic and cheerful view of the world – not to say his was a misanthrope… but he comes awfully close!  People are generally anything but heroic in de Maupassant’s work and Rob’s character in ‘Bel Ami,’ Georges Duroy, is no exception.  As noble as Edward is in the Twilight Franchise is as venal as Georges behaves in the new film.  Anyway – enjoy the clip!

Ace Showbiz reviews ‘Bel Ami’:   Robert Pattinson gets really steamy with Uma Thurman in the first clip for “Bel Ami“. Rob’s Georges Duroy is sexually teased by the older lady while they discuss the merit of changing Georges’ name into something “memorable.” The two start to indulge themselves in a heavy kissing session that leads them to bed.

George is a penniless soldier who gains power by seducing the wives of French socialites while traveling through 1890s Paris. Using his wits and power of seduction, he moves from prostitute’s embrace to passionate tryst with wealthy beauties who inhabit where sex is power and celebrity is an obsession, and where politics and media jostle for influence.

An adaptation of Guy de Maupassant’s classic novel, “Bel Ami” is directed by Declan Donnellan and Nick Ormerod. The period drama was premiered at the 62nd annual Berlin International Film Festival to somewhat mixed reviews from critics. Last March, the film was officially acquired by Magnolia Pictures, which has set June 8 as the day when the movie hits the U.S. theaters.

Do you see Rob as sexy beast?  Do you see Uma as a seductress of young men?  Does this role ruin your image of Rob as a hero?  Let us know in the comments below.