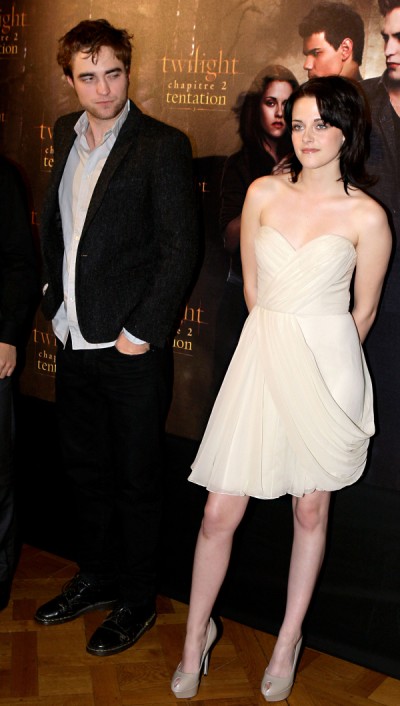 Robert Pattinson might have surprised fans when he agreed to continue with his scheduled publicity tour for his movie Cosmopolis, but in an effort to keep the event as drama, headache and heartache free as possible, he’s making sure one very important person will not be there to steal the spotlight.

Rob’s banning Ashley Greene from his premiere! No, no, not really. You know who I meant to say!

It’s Kristen Stewart! Rob’s banning Kristen from attending his NYC Cosmopolis premiere on August 13. According to Radar Online, the actor and the movie’s producers have agreed it would be best for everyone (except gossip wh-res like us) if Kristen stayed away from the red carpet that day because they are worried Kristen might try to use the event to talk to Rob and steal the attention away from the movie. Geez, I have to pull a poor Kristen on this one. She went from the town slut to Glenn Close in Fatal Attraction in five minutes.

“Despite the fact Robert and Kristen have been communicating by cell phone, she will not be at the Cosmopolis New York premiere,” a source told Radar. “Security was briefed and they were told that Kristen is not allowed anywhere near the red carpet or the after party. The decision was made because Robert just doesn’t want to see her. There were fears that she could use it as a chance to talk to him in person and that sort of drama is not wanted at the premiere. There’s also the fact that if she did attend, it would distract from the film premiere itself and the movie bosses are not interested in that sort of publicity. It’s going to be Robert’s first public appearance since the scandal broke – and they really want to make it less of a media circus than it already will be.”

I couldn’t agree more with this decision. You know, here’s another reason why Kristen is not my favorite person right now. Rob needs Cosmopolis to do well. His post-Twilight career has not been half as impressive as Kristen’s. When he hasn’t been sparkling all over women’s hearts, he starred in Bel Ami, Remember Me and Water for Elephants. None of them did exceptionally well and his acting was wildly accepted as sh-t in all of them. He obviously thought Cosmopolis was going to change the perception of his one-note skills. And he’s so proud of it! Flashback a couple months ago and he was telling the world how excited he was for people to see the film and said, “It’s the first time I really like one of the movies I make.”

And now it’s all going to get overshadowed by Kristen freakin’ Stewart! Maybe I’m wrong. Maybe people will want to check out the David Cronenberg movie more because of the scandal. It didn’t do particularly well at Cannes so maybe this unfortunate media glare is what it needs to generate some heat and give it more of a chance in the theaters. I’m kind of persuaded to go see it, but I like Cronenberg films, not necessarily Pattinson ones, though I’m always curious about his acting. It can only get better you know? Maybe not? People say that about Blake Lively and it just never really happens….

OK, let me know what you think! Is Rob getting Drama Queen excessive in his need to stay away from Kristen Stewart or is it a smart decision on his part to keep her away from the Cosmopolis premiere?