Robert Pattinson Says He Finally Has A Set Of Balls 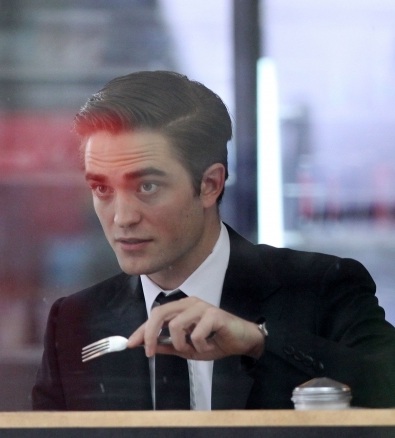 Twilight heartthrob Robert Pattinson’s ditched his sparkles and gained some balls.  And Rob says that after years of doubting his own acting ability he is finally gaining confidence.  That’s what the cover boy is telling French magazine, Premiere, when asked about his new film, Cosmopolis.

The dark and gritty drama-based David Cronenberg thriller was taken off the Don DeLillo novel of the same name about a billionaire who nearly loses his mind and all of his money in the span of one day. Pattinson is in every scene and he admits the prospect was initially daunting especially since he was at a point in his career where he “spent time doubting myself. As soon as I read a script that I liked, I was working myself up, asking myself if I was good enough.”

But it was a smart decision for the young actor who is more known for his messy hair style and relationship with Twilight co-star, Kristen Stewart, than his stellar acting technique. The movie is debuting at the Cannes Film Festival next week and Pattinson’s performance is already generating early praise.

“Filming Cosmopolis with David changed something in me,” he said. “It gave me balls.”

One might think the balls were firmly entrenched with the mega-success and money he garnered from playing veggie vampire, Edward Cullen. But Pattinson acknowledges that he knew people underrated him as an actor and recently told Vulture magazine he hasn’t just been resting on his chiseled bone structure, but has been honing his craft for years.

“I’ve been doing movies for eight years and I’ve been criticized often and all of a sudden, this teaser is released and everyone is excited,” Pattinson laughs. “‘It looks great! His acting is good in it!’ It’s ridiculous! I’d like to ask a question to those people who think I just started acting well: What do you think I was doing in Twilight? Do they think it’s how I act naturally? No, I had to make decisions as an actor. I find it funny when I read stuff like, ‘Will Cosmopolis finally prove that he can act?’ What does that even mean?”

No offense, Rob, but it means your acting was shit in Twilight. Luckily Cronenberg saw something in you and gave you another chance to prove yourself and, luckily for you, I will to.

“Yes I found him interesting in Twilight . . . I saw him in Little Ashes and Remember Me, and I am convinced that he could be my Eric Packer,” Cronenberg told Italy’s Cinerepublic last month. “It is a heavy role, he appears in each scene and I do not think I’ve ever done a movie before where the actor is always on the screen. The choice of an actor is a matter of intuition, there are no rules or instructions.”

I’m excited for this film. I watched the trailer and had absolutely no idea what was going on or what it was about but that’s nothing new for me and Cronenberg films. If the movie is anything like the director’s others (i.e. A History of Violence, A Dangerous Method) then we can expect Pattinson’s talent to be well stretched – which is a good thing for any actor but especially if you’re Pattinson.

Have you watched the trailer? Do you think Pattinson is living up to the hype?