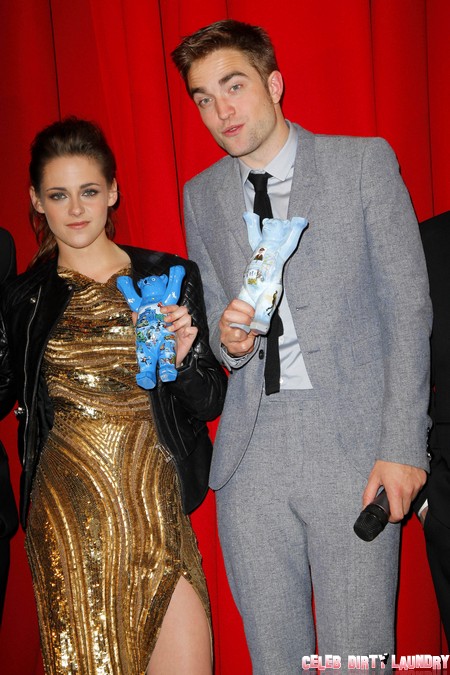 Oh, Rob, say it ain’t so!  According to In Touch, a source has confirmed that Robert Pattinson will in fact be breaking things off with Kristen Stewart as soon as their recent promotional tour for Breaking Dawn Part 2 wraps up.  Says the source, “after much agonizing, the actor has come to a decision that will surely blindside Kristen: He’s going to break up with her, this time for good.  He won’t have a tie to her after all this is done, and then he won’t be forced to see her.”

Whyyyy???  Why can’t you continue this showmance through until the release of the DVD?  Better yet, wait until the special edition boxed set comes out and then leave her ass.  That way I can cry on my couch and relive the Twilight Saga (or I should say Robsten Saga) over and over.  Otherwise, I’ll be forced to cry on my couch while watching movies 1-4, and then make my way to the theater to cry through 5.  Come on Rob, not cool.

I’m not going to lie, clearly Kristen had it coming.  She started off her relationship with Rob by cheating on her boyfriend at the time, that little actor from Sky High, Michael something (he’s not really relevant anyway). That was just a preview of what was to come.  She clearly showed a preference for older men.  Then she blew everyone away by going even older and cheating on our man Rob with her director, Rupert Sanders.  Now that one stole the show.  She pretty much made every Rob fan want to tear her up for breaking his heart and publicly humiliating him.

Supposedly she no longer reads any of the online gossip about her, but in this case it may have done her some good.  At least she might have had a heads up that her love life was about to implode.  Instead she will be blindsided just as Rob was when he tells her it’s over.  I’ve gotta say, smart move getting your own place, Kristen.  Perhaps you knew more about your future than we believed.