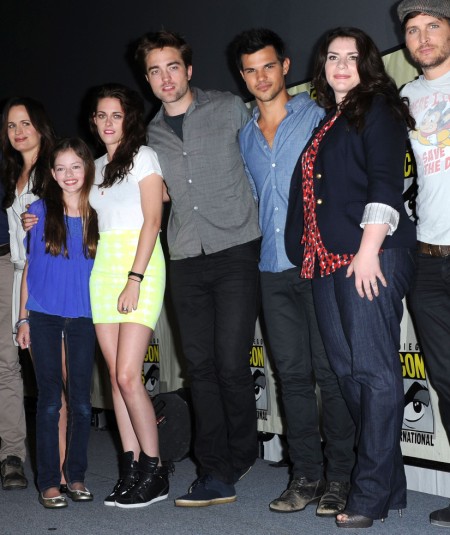 No one can fault Robert Pattinson for moving out of the house he shares with Kristen Stewart, cutting off contact, and basically wanting to be as far away from her as possible but the Twilight couple have one more movie to publicize and the studio is worried that Robert won’t want to uphold his end of the bargain and promote Breaking Dawn Part 2.

“Robert Pattinson is in pieces but the Twilight love triangle storyline is nothing without him and Kristen. It is eating him up that he has no choice but to see her again because of work. His humiliation is total,” a source told The Sun.

A source close to Summit Entertainment added, “There’s serious concern about the promotional tour, which is set to kick off in October. This is a potential nightmare for all involved. Fans look forward to seeing them together during interviews. It’s great publicity for the film. Robert even used to be happy to go to events with Kristen that he wasn’t contractually obligated to go to, like the Teen Choice Awards last Sunday.”

Well, those days are over. Even if Rob forgives Kristen, Breaking Dawn Part 2‘s promotion tour is going to be one of the most awkward things we’ve ever seen. It’s actually good for the film. Every look, every touch, every photo is going to be analyzed to death. You’ve got to feel bad for Rob because he really doesn’t have a choice. He’s contractually obligated to do each and every event. Summit owns those kids.

October is only two months away and this story isn’t going to dry up anytime soon. Rob and Kristen are going to have to get together and work something out. I can’t imagine Rob sulking the entire time. Say what you want about his acting skills, but Rob’s always been generous to Twilight and gives his fans a lot. He will step up when the time comes but just what will that include? Will he and Kristen decide to play nice as people who broke up but still remain friends? Or will they rekindle their romance for the fans? Those are the only options I can see happening. They can’t hate each other on the red carpet. Twilight fans WILL NOT stand for that. They can’t look uncomfortable or over it either. Summit’s got millions riding on its two stars’ acting skills and it’s not the acting on the screen I’m talking about.

Do you think Rob will opt out of promoting Breaking Dawn or will he be a sport? If he decides to go through with it which plan do you think he and Kristen will take – friends or rekindled lovers?