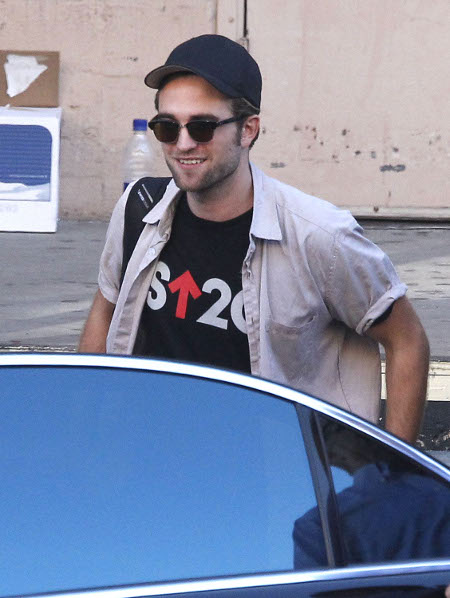 Robert Pattinson has been snubbed on the Fifty Shades of Grey role, which many sources say he was interested in, but that doesn’t mean he’s given up on his quest to star in a movie with X-rated tendencies. In an interview he gave recently, Robert Pattinson admitted that the Twilight films should have had way more sex in them, and the scenes featuring Edward and Bella in bed should have been raunchier and, perhaps, more Fifty Shades-esque. He said they should reboot the franchise and highlight all that vampire sex!

“They should do it as a straight-up porn film,” Rob said during an interview he did with Total Film Magazine. “That would be so good.” Of course, Rob is probably just joking, and he probably wouldn’t agree to appear in a film of that nature (or would he?). He allegedly expressed some desire to play the role of Christian Grey; however, nothing became of that prospective role, as author E.L. James reportedly said no to his involvement — which we’re not entirely convinced of that interaction, or even why Rob would want to play such a role in the first place. Talk about a career breaker.

The interview was done mid-July after Comic Con so, unfortunately, we can’t take this to be an attack on the future Fifty Shades film or a form of lashing out for not being considered further for the Grey role, but that’s beside the point. Pattinson wanted more sex from Kristen Stewart in the Twilight films!

Fans loved the break-the-bed-bedroom scenes, which were treated very cautiously, in Breaking Dawn Part 1. And fans are gearing up for more scenes of a similar nature in the last and final installment, Breaking Dawn Part 2, where Bella Swan will begin her life as a vampire — all while trying to mother a half-vampire half-human hybrid. Just another day in Forks, people.

What do you think about Robert’s statements? Do you agree with him? Do you think the Twilight films should have featured more vampire sex a la Fifty Shades of Grey? How do you think all those Twihards out there would react to a sexier version of the their dearly beloved films? Let us know in the comments section below if you’d be game for some raunchy Twilight action.