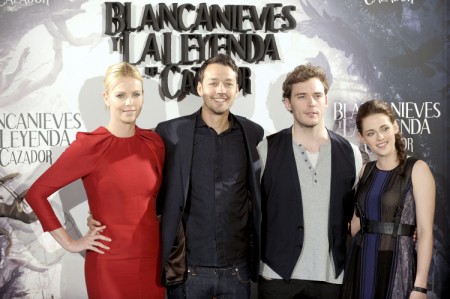 A lot of us are still scratching our heads over Kristen Stewart’s hook up with her Snow White and the Huntsman director, Rupert Sanders. He’s certainly not as lovely as Robert Pattinson but she must have had her reasons, despite how apologetic she seems to be now. So we thought we would delve a little deeper into this Sanders character and find out what was so special enough to make Kristen cheat.

It turns out SNATH was Rupert’s first feature film. So maybe that explains why he didn’t know not to screw with his young actresses! According to Celebuzz, his resume mostly includes commercials and short films but his inexperience didn’t seem to deter him with Snow White. The movie earned more than $20 million in its opening day alone.

The British born director is also married to model Liberty Ross and they have two children: 7-year-old daughter Skyla and 5-year-old son Tennyson. Did you know Liberty played the original Queen Eleanor in the film – you know, Kristen’s mother? Ouch. I remember thinking she was so beautiful! Safe to say there was no hanky panky going on on the set then although Rupert did plenty of gushing over his leading lady after filming finished. He told Screenrant, “She’s [Kristen’s] incredibly spirited and very kind of wild and also she’s got this kind of this alchemy to her. You’re not quite sure what it is about her but on screen she’s just incredible. And when you see her act you realize why she is such a huge movie star and why she’s going to continue to get bigger.”

So far, the only reactions we’ve gotten over the cheating allegations is from Liberty… sort of. Before deleting her Twitter page she left a trace of cryptic messages including: “Sometimes good things fall apart so better things can fall together”; “If you find it in your heart to care for somebody else, you will have succeeded” and finally, “WOW”.

I think those three letters really tell us all we need to know about Rupert Sanders, don’t you?