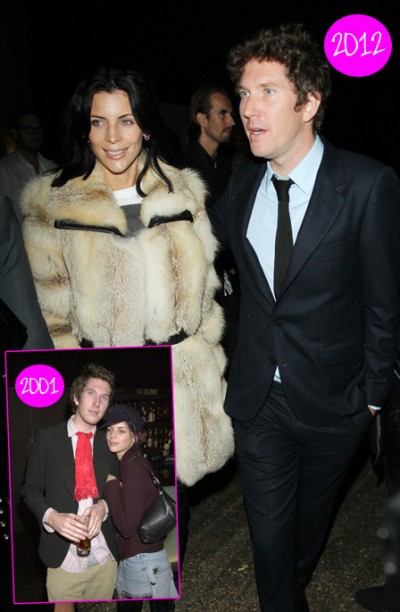 And who says you can’t find happy endings outside of the movies? Kristen Stewart and Robert Pattinson appear to be working on theirs and now Rupert Sanders’ estranged wife, Liberty Ross, might have found hers. Life & Style reports the other woman in the Rupert/Kristen cheating scandal is finally ready to move on and she didn’t have to look very far.

Liberty has been seen nursing her broken heart while enjoying her new found freedom with ex-boyfriend Christopher Taylor. “On Sept. 17, they arrived at the Serpentine Gallery event arm in arm,” a source told the magazine. “They left together, too.”

Life & Style found a pic of Liberty with the art gallery director from 2001. But just because they left an event together doesn’t mean they left together, you know? He could just be a good friend who is helping her out during this sh-t time. Or maybe he’s letting Liberty use him to make Rupert jealous? Rupert made it very known he wanted to get his family back together after he was spotted obsessing all over Kristen Stewart. He’s not been doing himself any favors lately. Just as Kristen’s words keep coming back to bite her in the ass, so do Rupert’s. In an recently uncovered interview with UK Vogue, Rupert couldn’t help himself from comparing the two women in his life and you can tell which one he was screwing, or wanted to screw at least: “There’s a look they share. Kristen is almost like royalty the way she understands what she has to do, in the way that she has to learn to compartmentalize… Well, Lib’s quite ‘regal’ or something as well.”

Thanks a bunch husband. Why bother mentioning Liberty at all?! Poor girl. No wonder she’s going back to the dude she was with before she ever met Rupert. He is such a douche. He reminds me of a 13-year-old girl with her first crush on a high school senior. It’s like he couldn’t help himself from gushing all about Kristen. I wonder if Liberty sensed something was going on while they were shooting. Did Rupert come home from work and talk about Kristen incessantly? And because Snow White and the Huntsman was his first real feature did Liberty think that behavior was normal? Lesson learned, I’d say.

Liberty’s moved on. Rob and Kristen are reuniting. Rupert is the odd man out. I’m OK with this, what about you?