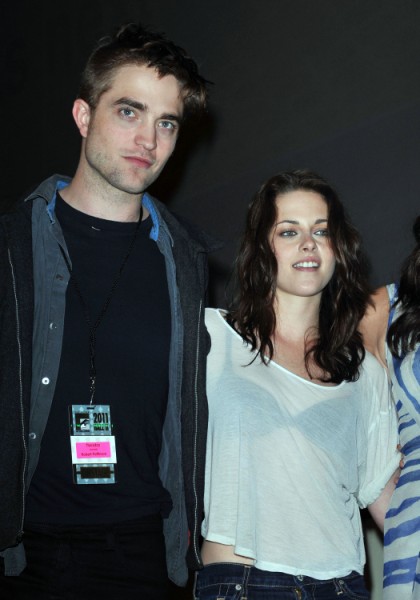 OMG! OMG! We finally have concrete proof Robert Pattinson and Kristen Stewart are back together… sort of.

The reportedly reunited couple was spotted by an innocent bystander in L.A. Yesterday @CookedKitfo tweeted, “Just saw Robert Pattinson driving next to me in Sherman Oaks.” But he wasn’t alone. @CookedKitfo followed up with, “Yea it was that Kristen girl…. Lol no. Honest to God. They were driving by my work in a residential area.”

So do we believe her? Poor girl. She’s getting harassed like crazy for info. If I saw Robsten, I’m not so sure I’d tell anybody! But it’s not totally out of left field for Rob and Kristen to hang in Sherman Oaks. They were spotted there last year when they hung out and shopped at American Vintage. However, it doesn’t sound like they made any stops this time out. If they went vintage shopping everyone would know about it! God, that must suck. They just have to pull the band-aid and step out together. Kristen and Rob can’t keep hiding. Well, I guess they can! But the sooner they come out the sooner people will get over it and move on, right? Maybe not? Twihards are not known for being the most laid back fans….

Does this mean Rob and Kristen are officially an item again? I can’t see why Rob would be wasting his time if he wasn’t trying to work through things. Even if he still has Rupert Sanders on the brain, he must be overcoming his issues! Good for him. Kind of wish we had a picture though. Rob and Kristen sightings are becoming the stuff of legend like Big Foot and the Loch Ness Monster but way less interesting. Do you think they’re back together but keeping it on the down low until they know where they stand with each other or is this just a case of wishful papping?