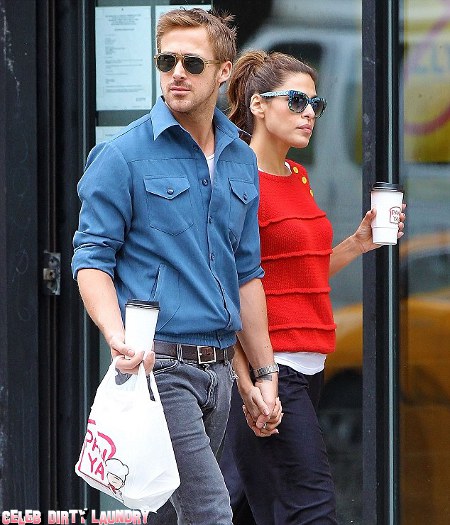 Ryan Gosling has reportedly been shutting girlfriend Eva Mendes down lately, chicas, saying that he wants to slow things way down. The two have been clung to each other non stop, even while attending Gosling’s Mom’s graduation ceremony. Donna, Gosling’s mom, just graduated from Brock University in St. Catherines, Ontario on June 6th. He attended the ceremony with his girlfriend Eva Mendes and, of course, all eyes were on them.

He caused quite  a stir because of course people recognized them, but he would not do an interview. “This is my mom’s day,” he said, not wanting to draw the attention away from her. Do the reporters not have any class or decency? Don’t they know he is a mama’s boy?

He used to bring her to all the events and award shows as his date — get a clue! Also, he did not want to throw any shade on the graduates because it was their day also. That is not to say that the people in attendance and graduates were not taking pictures and tweeting and twatting. Honestly!

Now, Ms. Mendes was there with him, like she always is stuck like glue, big sigh. Sources say that she was pressuring him for more of a commitment but he kind of shut her down in a nice way and said he wanted to take things slow. Which, chicas, I don’t blame him because she has moved too fast with other relationships before. See, his mother raised him right, way to go, bobocito! So congrats again!