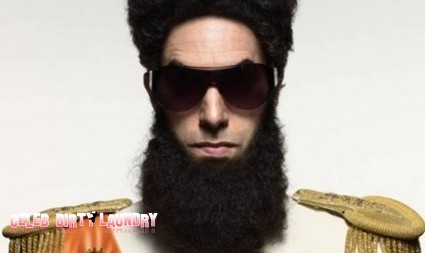 It’s kind of stupid how the Oscars are wondering why their ratings are dropping and people are losing interest.  Last year famous artist Banksy wanted to come to the Oscars wearing a monkey mask to preserve his legendary anonymity.  He then started to have thoughts of not going at all when they told him he couldn’t attend wearing a monkey mask.

This year, something similar is happening with Sacha Baron Cohen.   Sacha plays the lead in one of Martin Scorsese’s films, Hugo.  Hugo leads the Oscars with 11 nominations. Rumors have been spreading that Sacha may take advantage of the red carpet and dress in the role of his new summer release film Dictator.  Of course this is still just a rumor nothing has been officially announced.

The Academy decided to respond to these rumors in a stupid manner, by banning him from this Sunday’s awards.  But now the Academy is saying that they haven’t banned him, they will only ban him if he dresses in full ‘Dictator costume.’

I find this is extremely stupid, c’mon Sacha Baron Cohen has made a career with making brilliant characters such as Ali-G and Borat (The movie Bruno was too gay for me… literally.)   In my opinion having Sacha dress in costume would make the Oscars way more interesting,  but no, the Oscars have to be stuck up and want black tuxes and class, which is completely boring.

It seems like Sacha will have to do what the Oscars wants if he wants to walk the red carpet.  I think that is sad – since the idea of him going as The Dictator is simply amazing.