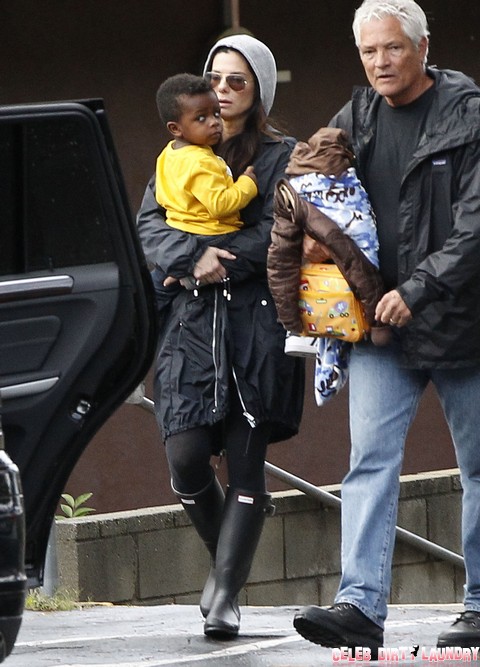 Sandra Bullock may be hung up on her ex husband, newly engaged Nazi supporter and serial cheater Jesse James, but that doesn’t mean her son has to be! The Academy Award winning actress has been on the man hunt since their nasty spilt in 2010, but has found that Louis Bardo Bullock, who turns three next month, doesn’t need a step dad—just a personal bodyguard! Louis is smitten with Sandra’s security staff, and photos show him hugging and kissing the older, white-haired man.

A source reported the unique situation to National Enquirer, print edition January 7, 2013. “Much to Sandy’s surprise, Louis has adopted the silver-haired bodyguard as his stand-in father. The situation caught Sandy off guard and she’s not sure how to handle it.” It makes sense that, unlike Heidi Klum, Sandra wants to keep her business life and personal more separate, but the heart wants what it wants! Despite the awkward attachment, “She’s happy that Louis has a strong, steady male influence in his life now, but she wishes it was someone she was dating.”

Sandra’s romantic life has been nonexistent, and the actress is reportedly worried about Louis’ family dynamic. “It’s been a difficult road for Sandy. Even though she’s scared to let a man in her life again, she knows that it would be best if Louis had a stable male role model that was romantically linked to his mother.” But she won’t be finding love in the arms of the bodyguard—a wedding band shows he’s taken.

Fortunately for Louis, the bodyguard just adores him. “The bodyguard enjoys carrying Louis, taking him to school, tucking him in at night, and reading him bedtime stories. Sandy didn’t want him to get too attached—but it’s too late now!” Photos show the bodyguard making silly faces while Louis holds on tight. Hey, in this century, we’re all about non-traditional family structures! What’s wrong with a boy turning to his mom’s bodyguard for a father figure? Stranger things have happened! I just hope he’s good at his job—it would be awful if Sandra had to let him go!