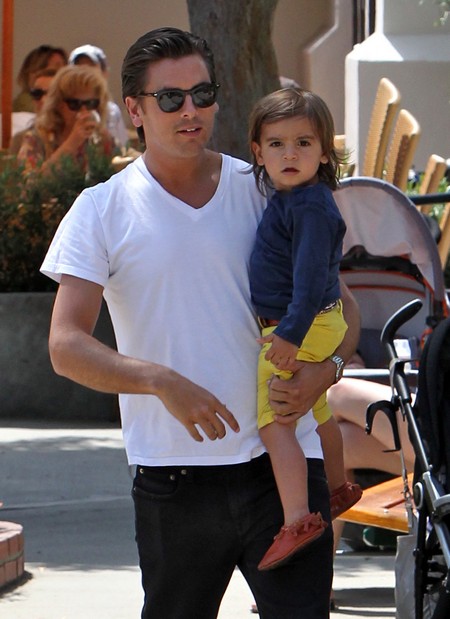 Are Kourtney Kardashian’s hormones getting out of hand? Little sis, Khloe Kardashian Odom seems to think so. The reality star took to her twitter page to out Kourtney tweeting, ‘@KourtneyKardash you are so hormonal it’s amazing. You go from evil to a saint in a blink of an eye.‘

This isn’t the first time the oldest Kardashian was labeled hormonal. Right after Kim Kardashian was flour-bombed on the red carpet in late March, Kourtney tweeted, “Classy to flour bomb my sister at her charity event helping women. I wonder if they would have dared thrown the flour at my hormonal and pregnant self!”

This is the second pregnancy for Kourtney who already has two-year-old son, Mason with boyfriend, Scott Disick. The couple is expecting a girl.

Unfortunately for her, it could be Scott who’s riding Kourtney’s last nerves. After skipping out on the baby shower last week and winding up drunk, rumors are resurfacing that Scott and Kourtney are on the outs. It’s even been reported that the Scott has moved out of their apartment and in to a bachelor pad in L.A.

This wouldn’t surprise me about Scott. Although he’s been a good father to Mason, he doesn’t seem like he’s ready to give up on his party boy lifestyle. He’s still pretty immature and four years younger than Kourtney. He’s still got some growing up to do.

But I don’t blame Scott. I’ve said it before, these Kardashian women should know better. Out of all of them I would excuse Khloe for not knowing what she was getting with Lamar since she married him 5 seconds after meeting him, but oddly enough, they’ve managed to stay together without constantly breaking up and getting back together.

Kourtney’s been with Scott for five years now. She should know what she’s getting. If he hasn’t changed by now, nothing is going to make him. She either has to cut the cord and move on or accept his behavior. She can blame the hormones if she needs to, she just needs to make a decision and stick with it!

Do you think Kourtney’s just suffering from hormones or is it Scott giving her all the stress?