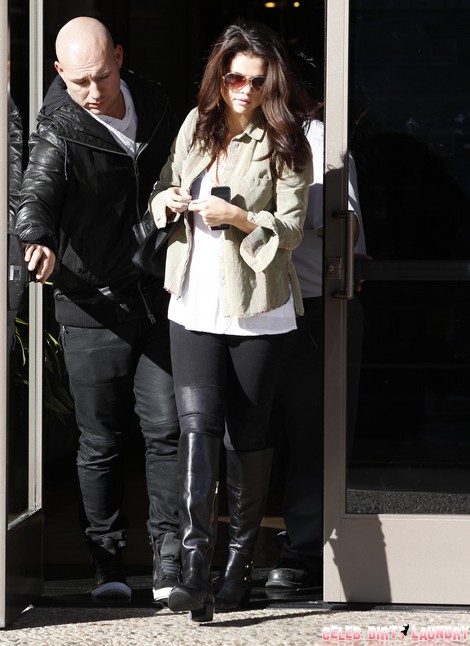 Is the sound of tiny pitter pattering feet in Selena Gomez and Justin Bieber’s future?  According to a report by TMZ, Ms. Gomez was photographed leaving a doctor’s office in Los Angeles Monday morning.  A source close to the starlet claims Selena had been suffering from a sore throat lately and believed she might have strep, which then prompted the visit to the doctor.

I call B.S. on that shiz.  If you think you have strep (which is contagious) then why would you have a sleepover with your singer boyfriend?  Are his vocal chords not located in that general area?  Was his impending performance not of any consequence?  Or were Justin and Selena just so hungry for make-up sex that they didn’t give her strep a moments thought?

Yeah, I’m not buying it.  I’m going to go with door #2, where Selena is visiting her doctor to either get a pregnancy test done or ask for the morning after pill.  The site also reported that Selena was suffering from symptoms and had to end a recording session early.  Symptoms of a pregnancy?  Dun, dun, dun…

Though it is possible that her management put her on birth control so as to not ruin her career, I highly doubt that they are there to make sure she keeps up with it.  Perhaps Ms. Gomez is trying to trap Mr. Bieber with an “accidental” pregnancy since some sources are saying that the tables have now turned and the whining Biebs is now on the fence about their relationship.  Jealousy can make even the sweetest of ladies a little psychotic and Selena is no exception.  And where is Justin in all of this?  Did he not want to escort his lady love to hear the good news?  Typical.

So readers what do you think was the reason for Selena’s doctor’s visit?  Does she look like she is in the early stages of a pregnancy or do you believe the strep throat story?