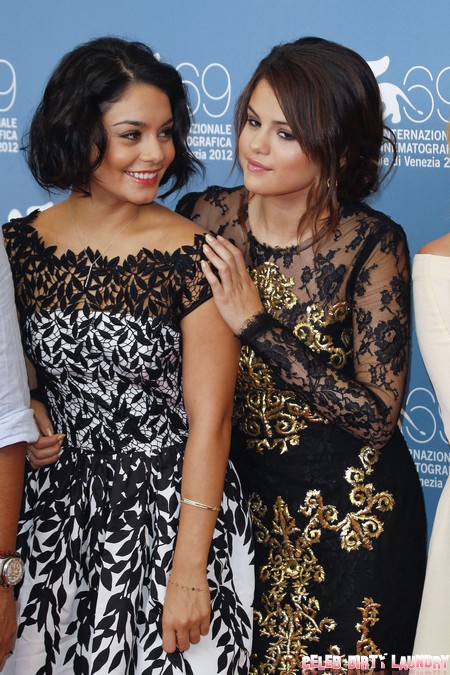 Vanessa Hudgens and Selena Gomez, former Disney Princesses turned serious actresses, are feuding over public relations for their new film, Spring Breakers. The independent film written and directed by Harmony Korine follows four young women on a destructive path of risky behaviors led by drugs and arms dealer “Alien” played by James Franco. The press surrounding the High School Musical and Wizards of Waverly Place actresses playing roles that counter their media personas has been obstructed by a feud based on the all-important “who is getting their picture taken more?” factor.

Gather reports that the feud “stems from an upcoming issue of Vanity Fair in which” Gomez “landed a feature” while Hudgens did not. Hudgens, who has a larger role in the indie flick, is sore about the lost opportunity and believes that it isn’t talent, beauty, or brains that landed Gomez the feature. Hudgens believes it’s Gomez’s arm candy that gives her the edge.

No stranger to public romance, Hudgens was once the Disney star at the side of the most popular guy in mainstream media, The Lucky One’s Zac Efron. But the High School Musical days are long gone and there’s a new princess on top. Gomez and her beau since 2010, Justin Bieber, are one of America’s favorite celebrity couples, a title once reserved for Hudgens and Efron. A source close to Hudgens reports “[Vanessa] has been saying that if she was still with Zac, she would have gotten into the magazine the same way Selena got in because of Justin.”

As promotions for the film begin rolling full speed ahead in preparation for fall film festival showings, we can hope the two put aside their differences. The entire tone of the film is a sharp juxtaposition with the bright and shiny start both of these young women had with Disney. Maybe now they can focus on promoting the film and their adult images as actresses, singers and role models.