Selena Gomez Gets Rocked By Earthquake And Justin Bieber 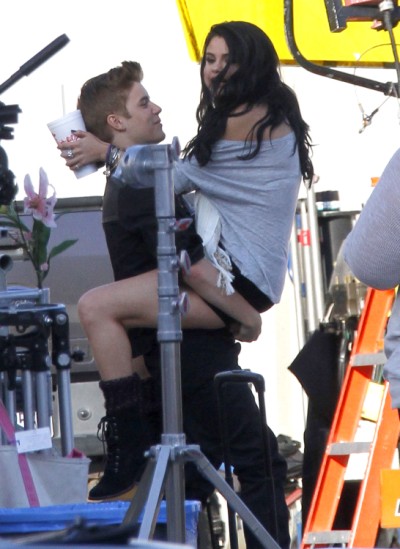 Selena Gomez returned to the states after a couple weeks of filming in Bulgaria and she and boyfriend, Justin Bieber reunited and it felt so good… well, sort of.

The Daily Mail reports that Selena was greeted at Los Angeles’ LAX airport by a bodyguard who escorted her to a waiting van that was holding Bieber. He was engrossed in a game of Mortal Kombat. Oh, but that didn’t matter to Selena who launched herself in a passionate smooch fest with her shaving-impaired boyfriend.

Perhaps Selena was feeling a delayed reaction rush to the earthquake she got caught in while filming her new movie, The Getaway, in Sofia. The 5.9-magnitude quake rocked the singer earlier in the week. She went to twitter to inform her fans she was shaken, but all right. “Thank you for all of your concerns!! Earthquake was scary but thankfully everyone is ok. Praying for Italy.”

After making out for a few minutes, the van sped off. Young love is so dramatic and adorable. Despite the obvious excitement the couple had when being reunited, Bieber told Ellen Degeneres on her show last week that the couple’s long-distance romance isn’t all that difficult thanks to Skype and FaceTime. “Ten years ago, or even five years, long-distance relationships were much harder,” he admitted. “Now you see each other anytime you want!”

Yes you can Justin. But you can’t kiss her anytime you want but you quickly made up for lost time! It’s gross but kinda cute too. First loves are the best! It’s the only time when you don’t mind making out with your boyfriend in a van with a video game’s karate chop sounds blasting in the background.