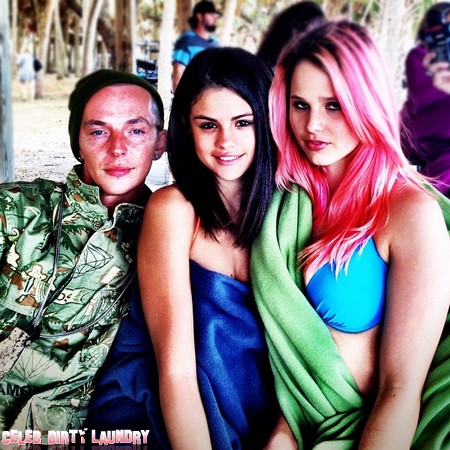 Selena Gomez is just plain hot…  for Justin Bieber.  The photo appeared on Twitter and Selena is with Rachel Korine and wearing nothing but a towel!  Justin better get his butt down there to the ‘Spring Breakers’ movie production set before something they both will regret happens!

Hollywood Life reports:  This time, it’s courtesy of the Sewell brothers, who play drug dealers in the film. On Mar. 26, they tweeted out a picture with Selena and costar Rachel Korine. In the picture, a smiling and natural-looking Selena is wearing nothing but a towel over — what else? — another bikini!

It looks like Selena was keeping busy while her boyfriend Justin Bieber was promoting the release of his new single “Boyfriend” in New York City!

Selena Gomez has that innocent air about her but it ain’t fooling old Justin!  The Biebs knows his lady is hot and he makes sure to take good care of her.  In fact Justin has even had a jealous fit or two in the past.  Like the time he freaked when Selena wanted a male massage…

Are Justin and Selena the cutest couple around?  Will they remain true to each other forever?  What do you think?  Let us know in the comments below.