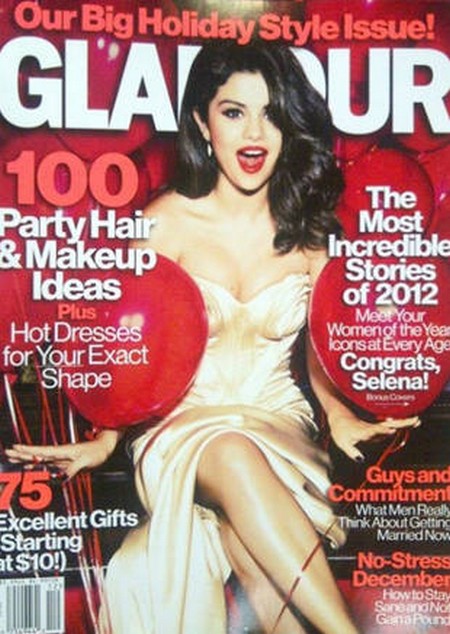 Selena Gomez is all grown up! The Wizards of Waverly Place actress has been name Woman of the Year by Glamour magazine in their December 2012 issue. It’s their holiday issue and Selena is made up old Hollywood style. Selena was picked as the Woman of the Year and icon for the age group 20-29. She beat out other 20 somethings like Taylor Swift and Venessa Hudgens. What does Selena have that the others don’t? Besides having a very high profile teenaged heart throb boyfriend, Selena is a well rounded young woman with a good reputation.

Selena is having quite a year. She was a teenaged actress but was mostly known for being Justin Beiber’s girlfriend. Selena has grown up quite a bit this year. She graduated from a child star on Disney to a singing career (her single I Love You Like A Love Song was a big hit earlier this year) and taking on more grown up roles (she appears in the movie Spring Breakers that features drugs and grown up dialogue).She recently returned to family friendly productions, where most of her fan base is, with Hotel Transylvania. She does grown up things like becoming a UNICEF ambassador and goes on romantic remote vacations with Justin. The question is should she really be considered a person that other young women to look up to and respect?

Selena has a squeaky clean reputation. There are no sex tapes or nude pictures floating around on the internet. You don’t see her playing the diva card or walking around in questionable clothing. Selena is super friendly with fans. I still have a few problems with naming Selena Woman of the Year. She still looks like a teenager, is dating a teenager, and she is still making the covers of teen magazines. Selena has gone to many high profile events dressed to the nines and her every day style is tame. That doesn’t change the fact that her face looks like a kewpie doll. Most readers of Glamour are in their 20s or older, so putting Selena on the cover of their magazine shows that someone thinks of her as an adult.

She is at an awkward age where she isn’t a kid but not old enough to drink in a club. The bottom line is Selena lacks the life experience and career material to make her a role model. I think she got the title because her and Justin’s relationship is a hot topic in the media, and anything she does will probably sell magazines. It could be worse. Glamour may have picked crazy serial dater Taylor Swift with her sweet disposition and her mean songs about ex boyfriends. That is not someone I would look up to.