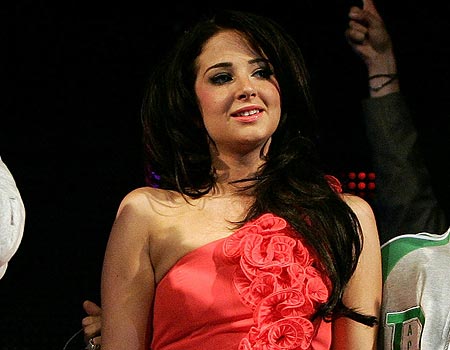 Tulisa Contostavlos has denied that she is the woman featured in the sex tape released yesterday but she can’t deny being caught at the airport with a sex toy.  Her cousin Dappy however, claims that the tape is genuine.

Nevertheless her lawyers have managed to get court injunctions in both North America and Europe banning it release.  The injunctions stop anyone from using, publishing or disclosing details of the tape to any other person.

Our photo shows a screen cap allegedly taken from the sex-tape video although we do not know who the woman featured is.  The six minute film, taken from a camera phone, shows a blonde performing a sex act.  A spokesman for the website which uploaded the video wrote on their Twitter page yesterday afternoon:

‘So ummm… Tulisa’s lawyers just left our office after serving us a handwritten cease and desist notice.’

‘So basically we’ve had to take the video down.’, Sex Tape, Sex To

This is not the first sexually related scandal for Tulisa.  The celeb was found to be carrying a sex toy at the airport check-in on her way home to London from Miami last month.

Tulisa tried to cover up:   ‘I only bought it as a present for a mate, but the joke ended up on me.’

The Daily Mirror reports:  The X Factor judge was apparently approached by an unidentified man last year, who wanted to sell a supposed sex tape for $750,000.

A spokesperson for the star said at the time: ‘This tape is 100 per cent fake and is just someone trying to cash in on her X Factor role.’

‘She is horrified that someone would go to the extreme lengths of fabricating a video. It is absolutely not her. Tulisa has categorically never allowed anyone to film her having sex.’

Camden-born Tulisa shot to fame with N-Dubz in 2008, which she formed with cousin Dappy (Costadinos Contostavlos) and ex-boyfriend Fazer (Richard Rawson).  The trio had performed together from the age of 12.

The star broke off her 18-month relationship with Fazer in January, amid rumors he wanted her to settle down but she was determined to break the U.S. market with her first solo album.

Despite their romance ending, the pair were said to be on good terms, with Fazer producing some of the tracks on her debut album.

Writing on his Twitter page following the reports yesterday, Fazer said: ‘And I’m not commenting on s**t!! Rice and peace mate!!’

Her estranged cousin Dappy cryptically wrote on his Twitter last night: ‘Never let a relationship get 2 da point where u start acting in a way u WOULDN’T HAVE in the beginning. I Learn from my mistakes.RealS***.’

Rapper Dizzee Rascal was one of the celebrities who commented on Twitter following the furore.  He wrote: ‘Just watched the video… Definitely buying the album.’

Tulisa’s spokesperson denied that the film starred the X Factor presenter, saying, “This tape is 100 per cent fake and is just someone trying to cash in on her X Factor role.”  This contradicts the comments of Contostavlos’ band-mate Dappy who confirmed that Tulisa created the video with ex-boyfriend Fazer around three years ago.

What do you think?  Is Tulisa protesting just a bit too strongly?  Is cousin Dappy telling the truth?  Let us know in the comments below.