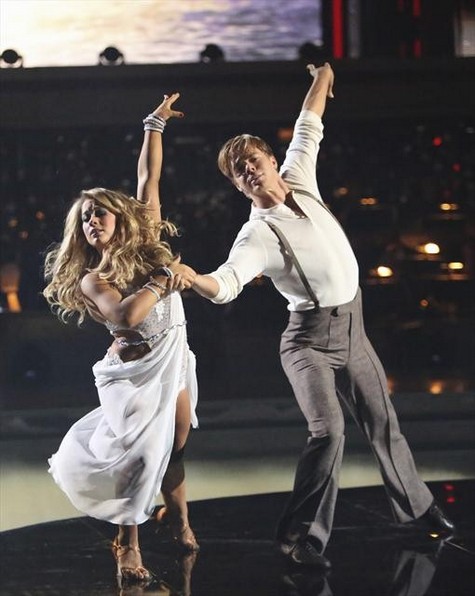 Shawn Johnson danced a Cha-Cha-Cha routine for Country night, on Dancing with the Stars: All-Stars performance show tonight. The danced their Cha-Cha-Cha  to “She Thinks My Tractor’s Sexy” by Kenny Chesney.  All the 8 remaining couples hit the stage performing to some of country music’s biggest hits. The celebrity was also required to perform a solo during his or her routine.   If you missed the show, we recapped tonight’s show for you and if you want to see how all the couples did go HERE!

Shawn Johnson  and professional dancer Derek Hough dancing a Cha-Cha-Cha routine.  Shawn and Derek did not say anything about their dance this week.

Judges’ Comments: Bruno:“Forget about the tractor you are the sexy – right on.  What I love about it was the fusion of coutry and cha-cha ! It was incredible!”  Len:  “The thing that is reasonable is minds can differ.  The choreography was fantastic.  The movement was fantastic.  To much frippery and too many gimmicks lets just get to it. ”  Carrie Ann: “I agree with Bruno what is good how you blended the two styles together.  You are exciting to watch.  I think the solo was a little bit stiff.  I thought it was still fantastic!”

Watch the video below and let us know what you think? Do you think Shawn did enough to avoid elimination this week? Sound out in the comments below!