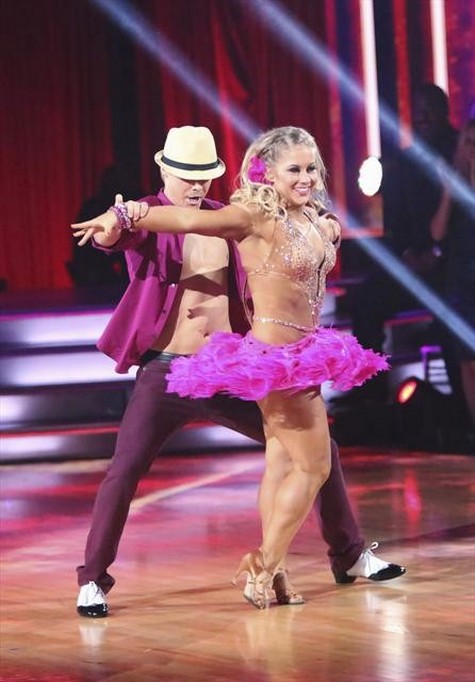 Shawn Johnson danced the Rumba for her dance on DWTS Guilty Pleasures Week.  Shawn and Derek chose to dance their rumba to her guilty pleasure song “My Heart Will Go On” by Celine Dion on Dancing With The Stars All-Stars 2012 Season 15 tonight.  If you missed the show, we recapped tonight’s show for you and if you want to see how all the couples did go HERE!

Shawn Johnson and professional dancer Derek Hough, dancing the Rumba.   The couples had this to say to say about their dance, “My guilty pleasure is the Titanic. So we have the Rumba…” said Shawn. “The sexy, sensual dance. And I’m going to be Jack. You’ll be Rose. Rose! Rose!” said Derek

Judges’ Comments: Len: “For me it was a Dickens novel, I had great expectations and it was Bleak House.  There was no hip action.  I loved the number, but it was not a Rumba.”  Bruno: “That was awesome, ever changing shapes.  It was like waves in the ocean, I was with you every minute, touching and romantic absolutely stunning!”  Carrie Ann: “I feel like a proud mama, you have grow so much.  That life was fantastic but I have to send to your room, because there are not lifts.  Alright (people boo)”

Watch the video below and let us know what you think of Shawn’s performance? Do you think Shawn did enough to keep her around next week? Sound out in the comments below!