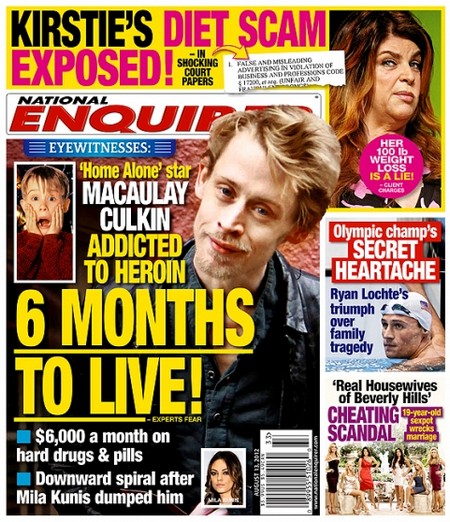 Kirstie Alley has been accused of faking her weight loss in order to mislead consumers and now her diet scam has reached court! In court papers obtained by The National Enquirer a former client has called into question Kirstie’s 100 pound weight loss claiming that is was a lie. As we reported on July 19, Jennie Craig is inexplicably teaming up again with Kirstie despite her yo-yo dieting and severe fluctuations in weight. Kirstie puts on weight and takes it off without any apparent regard for her health or appearance. Kirstie is back up over 200 pounds and she hopes her upcoming participation on DWTS will give her the incentive and the exercise to lose some of it.

This week’s edition of The National Enquirer covers several hot stories and the most disturbing is Macaulay Culkin’s alleged addiction to heroin.  The Enquirer claims that the retired child star can’t over being dumped by Mila Kunis and has resorted to heroin.  They say that the poor guy has only six months to live!

Surprisingly the names Robert Pattinson and Kristen Stewart don’t appear on this week’s cover!  However we do learn all about another cheating scandal – this on The Real Housewives of Beverly Hills.

The National Enquirer reports: The most contentious couple on “The Real Housewives of Beverly Hills” – Adrienne Maloof and Dr. Paul Nassif – are calling it quits over allegations that he cheated with a teenager!

Tension between the two escalated during the hit Bravo show’s second season as they argued over everything from finances to the time he spent away from home.

But despite the heated verbal battles, Adrienne remained committed to the marriage for the sake of their three sons – Gavin, 9, and 6-year-old twins Christian and Collin.

In mid-July, the 50-year-old blonde beauty exploded in a fit of rage when she was shown a blog post on a website that accused her handsome hubby of having a quickie tryst in 2006 with a 19-year-old “bimbo” who worked in his office, a source told The ENQUIRER.

“Adrienne was hurt and embarrassed, but more than anything she was angry!” the source revealed. “Adrienne believes it wasn’t the first time he might have cheated.”

The Enquirer also tells about Ryan Lochte’s triumph over family tragedy.  So Hollywood is NOT the only thing that matters.  Good to know.