Should Kirsten Dunst Be Worried Kristen Stewart Is Single? (Photos) 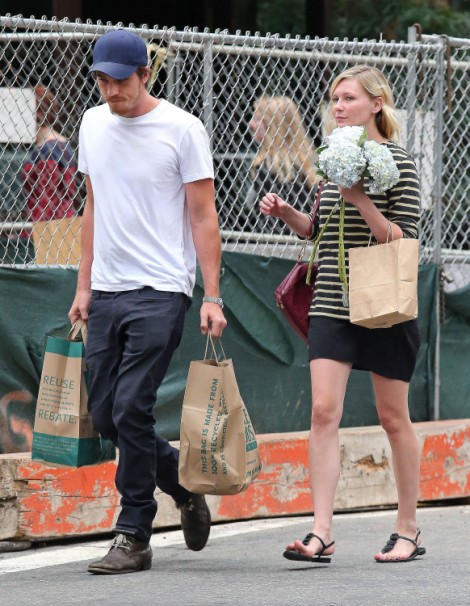 On the Road co-stars Kirsten Dunst and Garrett Hedlund started hooking up some time after filming ended  last year and and have been pretty public about their new lovey dovey status. By public I mean they actually walk down the street touching each other and don’t walk ten steps a part so paparazzi cameras can’t catch them in the same frame. Fine. Cute. Adorable. They’re both hot and I love Kirsten Dunst in love. They are supposed to meet up with Kristen Stewart at TIFF this week to debut their movie and I couldn’t help but wonder if that reunion would be bittersweet for Dunst. With all the rumors that plagued Garrett and Stewart while they were filming, could Dunst be nervous that Stewart is now a trampire on the prowl?

Let’s back up. Garrett and Stewart got pretty close while filming On the Road. Apparently they hung out and partied a lot so the tabloids jumped on it trying to create a love triangle and stories that Stewart was using Garrett to make Robert Pattinson jealous were all over the place. It’s crazy weird reading the stories now post-cheating scandal! Anyway, Star magazine dished about Stewart and Garrett’s flirtatious relationship along with Celebuzz and a host of others. Stewart and Rob were away from each other filming with hot co-stars. It was the natural story to make up and it was safe since Stewart had a boyfriend and Garrett was single. But what a difference a scandal makes! Now Garrett is attached and Rob won’t touch Stewart with a ten foot pole. Will Dunst stay extra close to her main man this week?

By all accounts it looks like Dunst and Garrett are pretty solid. The couple seem super cute and totally attached. Check out the photos below. They shop at Whole Foods together! Domestic bliss! Besides, I doubt Stewart would think of stealing him away – not because of hurting Dunst – but because of what another scandal might mean to her already crusty image. It’s not like she cared what stealing Rob away from Nikki Reed would do to their friendship, right? No one really knows the particulars of what went down between those Twilight stars but common thought was that Rob and Nikki were hooking up and then Stewart jumped in the middle and now Stewart and Nikki aren’t besties anymore. It happens. All’s fair in love and war and all that jazz but Stewart might take that little credo to the extreme.

Is she reminding you of any other famous temptress? Angelina Jolie maybe? I keep getting the Angie vibe with Kristen! For awhile there the studios were trying to make her into the next Angelina-type vixen. With her warrior role in Snow White and the Huntsman, there was talk Stewart would sign on as the new Angelina in the sequel to Wanted. I’m not sure whatever happened to that but people were desperately trying to make her out to be the next bombshell badass actress. And then she screwed her director in her mini cooper and became the trampire. Angelina couldn’t have planned it better herself although Angelina would never have apologized.

Wives/girlfriends also have a bad habit of following their men to set when they film with Angelina. There were rumblings that Vanessa Paradis stayed super close to Johnny Depp while he filmed The Tourist with Angelina in Venice. Looking back now, Vanessa had reason to be suspicious but not about Angie!

Dunst may know about Stewart’s past with Rob and Nikki. She may not. She sure as sh-t knows about the Rupert Sanders scandal and if Garrett and Stewart flirted while filming. All I’m saying is I wouldn’t be surprised if she stayed close this week. Stewart’s dealing with a break up and her parents’ separation. If she wants to blow off some steam and frustration with attention from a dude, Garrett seems like the easy mark!

Do you think Stewart has developed an Angelina-like homewrecker reputation in Hollywood? Will it follow her from set to set? Should she shy away from it or embrace it? Angelina totally embraced hers and look how it worked out for her!