Snooki And A Sober Deena Cortese Take On Seaside Heights 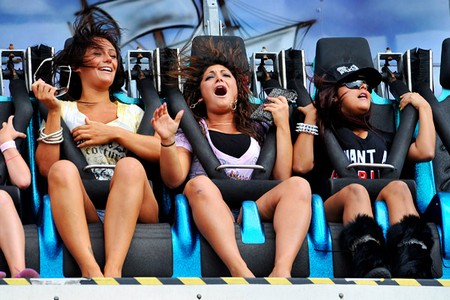 A pregnant Snooki, whose real name is Nicole Polizzi, and feisty pal Deena Cortese were spotted around Seaside Heights. Snooki had on some of her big shoes like she always does.

Deena is having a lot better weekend than she did last weekend. She got arrested for disorderly conduct after being drunk in public. She was said to be upset and missing her fellow Jersey Shore cast mate Snooki. Snooki is not currently living in the Jersey Shore house because she’s expecting and doesn’t want to be around everyone drinking.  Deena managed to avoid any upskirt moments on this outing.

Snooki was riding a Hoover round type mobility scooter. I guess all the walking around was more than the 6 month pregnant star could take.  Deena hitched a ride on the back of the scooter at one point. The 2 united meatballs also took a ride on a Ferris wheel. Snooki had a Baby doll clutched to the bar of her seat. I really hope this is not how she’s getting ready for motherhood. Or that would be scary.

Snooki said she’s changed a lot lately so that she’s more mature. She’s even been eating healthier. She gave up tanning and drinking when she found out she was pregnant. I do wonder if she will pick up her bad habits once she delivers in a few months. Guess we will have to wait and see about that one.

Fiance Jionni Lavelle was not with Snooki today. It looks like she just needed some meatball time. It was good to see the Jersey Shore stars having some fun without drinking.