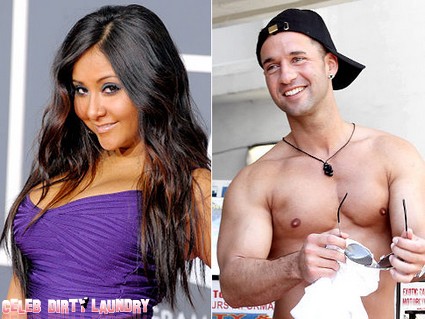 Having a baby and checking into rehab is a bit too grown up for The Jersey Shore. So Snooki and Mike ‘The Situation’ Sorrentino will take a back seat in the next season. They’ll be replaced with younger, wilder, better looking wannabes. How times change!

According to TMZ ….Producers of the popular reality TV show are really worried about the effect of  pregnancy and sobriety at The Shore. They don’t want tame cast mates who are growing up and moving on…they ‘re looking for young guys and girls who want to party 24-7, sleep with each other and have a permanent hangover. The less class the better.

Snooki’s pregnancy was the first wake up call for the Producers.They could see GTL turning into KDP – that’s kids, diapers and playgrounds. Not what the Jersey Shore is all about. Then The Situation checked into rehab and they decided two new members were needed to keep the show edgy and controversial. Celeb Dirty Laundry covered Mike Sorrentino’s problems here The Situation Acting Paranoid Before Rehab

The Snookster and The Situation will still appear on the show but they’ll be bit players. We’ll get  an occasional cameo here and there to keep the old fans happy but they definitely won’t be the stars they once were. The focus will be on  new talent and the next generation. It’s all about keeping the show fresh and relevant to the audience.

Season six is due to begin filming this summer. There’s no official comment from the Production company on the role Snooki and Mike will play.