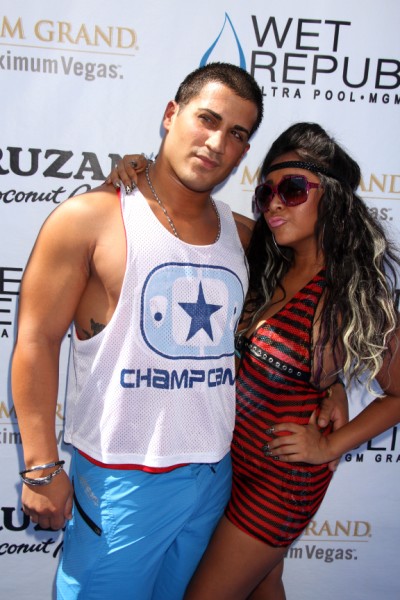 Snooki (Nicole Polizzi) is tired of sitting and home with that baby Lorenzo and is itching to get back to her partying roots! According to Star magazine, the pint-sized reality star said, “Peace out” to her fiance and baby so she could spend a night boozing with her friends. And this is bad because why?

Well, fiance Jionni LaValle is fed up with Snooki’s selfishness! That’s why! He just can’t understand why a woman who just destroyed her body by caring around a living being inside her for the last nine months and has subsequently had little, if any, time to herself or regular sleep would want to ditch all of her cares for one blissful night of alcohol and dancing.

“Snooki is constantly whining about how much she wants her pre-baby life. The only thing she’s wanted to do is drink with friends,” a source told the mag. “Things are so bad that Snooki’s mom, Helen Polizzi, has had to swoop in and clean up her daughter’s mess, leaving Jionni and Grandma as [baby] Lorenzo’s sole caretakers while Snooki lives it up.”

Why can’t Jionni clean? He has two hands.

So is this story true? Probably. Are the quotes made up? Probably. What new mother out there doesn’t want to get away from everything for a little while? And have you ever been over to a new mother’s house? It looks like shit. They don’t clean because they’re TIRED and that’s OK.

If I saw Snooki in a bar, I’d encourage her to buy herself a shot (biotch has way too much money for me to want to buy her one). She’s a young mom and, from what I’ve heard and seen on bits and pieces of the final Jersey Shore season so far, has kept it tame and serious while pregnant. Why would that change after? She played a dumb ass for the cameras but I don’t think she’s a dumb ass in real life. She’s tired of homemaking and wants to go out with her friends. There’s nothing dumb about that. She’s practically a feminist.

If Snooki leave fiance, Jionni LaValle, to party it’s only for a short period of time and it’s only for her sanity, right? For Christ’s sake, she’s not Dina Lohan.