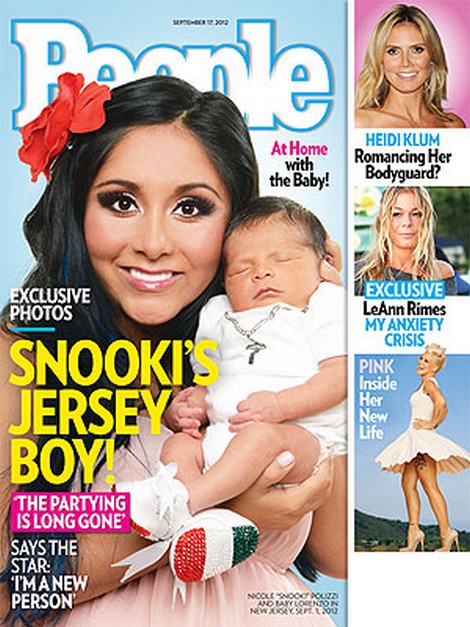 The current issue of People Magazine features the cover story “Exclusive Photos – Snooki’s Jersey Boy!”  People has scored the exclusive photos of Nicole “Snooki” Polizzi with her new son Lorenzo Dominic LaValle, with her fiance Jionni  LaValle.  The photos were taken just six days after the little tots birth in New Jersey at her home.

People has the exclusive interview, “It’s a different kind of love that I never felt before,” says Polizzi, 24, who is currently filming the second season of her MTV spin-off Snooki & JWOWW. It took more than 24 hours of labor, but the pint-sized reality star finally gave birth to her son on Aug. 26. Happily, she and LaValle say that choosing a moniker was much easier.

“We were going back and forth, and I just happened to think of Lorenzo,” says LaValle, 25, who adds that he was inspired by a child he knew from his hometown, where he and Polizzi now live with his parents. “She loved it.”  The baby’s middle name, Dominic, is in memory of Polizzi’s uncle, who died. “I did it for my dad,” she says.

Snooki claims since getting pregnant and giving birth she is a reformed party animal.  She says she is a new person, her partying is long gone.

To find out more about her delivery of little Lorenzo, her weight loss plan, her wedding plans and exclusive photos, pick up the current issue of People Magazine on stands Friday.