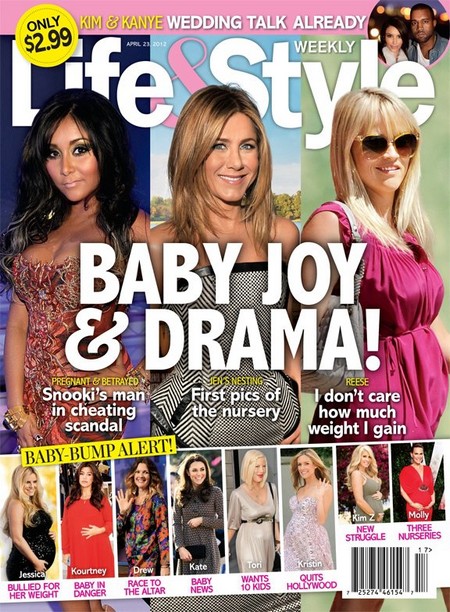 The current issue of Life & Style Weekly features the cover story ‘Baby Joy & Drama.’  It is baby week for the magazine and they have the scoop on all the celebs they believe are pregnant.  The have the details on how pregnant Snooki who has been so excited by her pregnancy is headed for heartache because she is being betrayed by her cheating man.  According to sources her fiancé Jionni LaValle who she has been dating for one year and a half is allegedly ‘secretly romancing former girlfriend’ Erica Wecksler.   The source went on to say ‘He’s engaged to Snooki but go­ing behind her back to contact Erica, calling and texting her. He’s cheating on Snooki.’

The magazine also claims to have the first pictures of Jennifer Aniston’s nursery for her baby, the problem is Jennifer has not announced she is pregnant.   Another star who has not confirmed her pregnancy yet,  Reese Witherspoon has said according to the magazine, she does not care how much weight she will put on.  Maybe next week Life & Style will confirm they are actually pregnant :-)

They also have a baby bump alert this week starting with Jessica Simpson who has been bullied about her weight.  The View’s Joy Behar called her “fat.”  Many celebs have jumped to Jessica’s defense including Tori Spelling who is pregnant .  She said: “When women are pregnant, people need to lay off.  Every body is different. As far [as] weight, you never know what is going to happen.  You can’t control what angle people are snapping your photo from.”

Life & Style also claims Kourtney Kardashian who is expecting her second child with Scott Disick’s baby is in danger and they have Kate Middleton – baby news.

To add to all the speculation this week they go for a real whopper and claim that Kim Kardashian and Kanye West are getting married.  Do you think Kimmie is headed down the aisle again?

To find out all this and more pick up the current issue of Life & Style Weekly!