Snooki’s Engagement And Pregnancy Have No Room For Haters 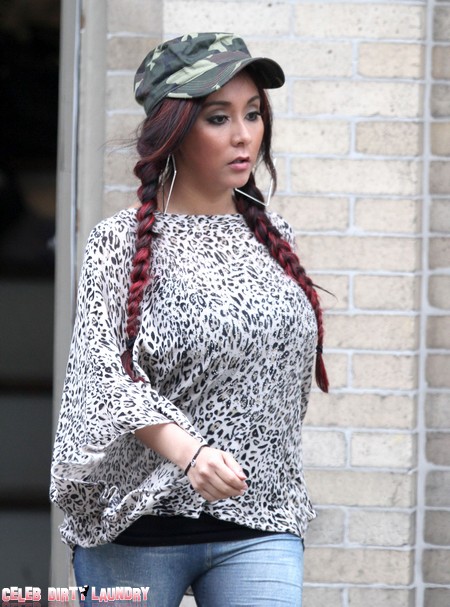 Hi there Kittykats – Congrats goes out to Nicole ”Snooki” Polizzi and her boyfriend Jionni Lavalle they are officially engaged and expecting a baby.  I am so happy for her, because that is all that girl wanted and she wasn’t afraid to let the world know it.  Now who is throwing shade on this happy event, Snooki’s ex-boyfriend Emilio.

He actually had the nerve to say,  “I hope she doesn’t get hurt, but I wish she would miscarry the baby if she is pregnant”.

I guess after he got the backlash from his remark yesterday, he was on the radio this morning, bright and early back peddling fast.

He said, “He was misunderstood and that he would never wish a miscarriage on anyone, because one of his girlfriends had two and he knows how painful they can be”.

He also went on to say, ”That if Nicole is pregnant then that mean he can’t talk to her anymore”.

Emilio please crawl back under that rock where you came from.  I really don’t think Snooki is talking to you with Jionni around.

How the producers are going to work this into her and J-Wow’s upcoming reality show I really don’t know.  Snooki and J-Woww’s reality show has had problems from the start.  Firstly no city in Jersey wanted them to film there, (too much media traffic).  Secondly it was supposed to be two single girls, then J-Woww found Rodger and now Snooki has Jionni.  I’d say the producers have their hands full.