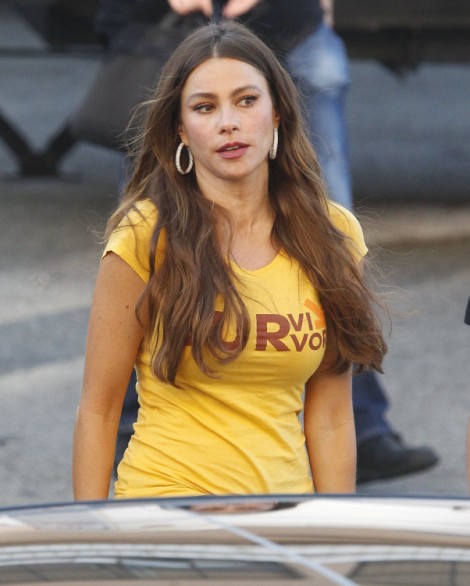 This is the tale of two celebrities – one telling the truth and one thinking she’s telling the truth but probably lying to herself. Let’s be the judge! By pure coincidence this morning I woke up to Sofia Vergara and Cameron Diaz both talking about what it feels like to turn forty. And they have very lovely, very different answers.

Sofia covers Lucky magazine next month and talks about her boobs a lot but also fills the mag in on how she feels about growing older. “Turning 40 is horrible. People that say it isn’t are full of shit.”

Awesome. I love when celebrities are honest for one brief moment in time. I get the feeling Sofia is honest more than that though, don’t you? So this is the perfect segue to Cameron. She’s in Esquire this month talking about babies and weddings and, naturally, getting older. Do dudes have to answer these lame ass questions about age all the time? I doubt it. I feel like Clooney’s never asked how he feels about getting older. Reporters grill him on Darfur instead which infuriates me. Anyway, Cameron said, “For the first time in my life I’m content. I’m so excited. Getting older is the best part of life. Like, I know more than I’ve ever known. I have gratitude. I know myself better. I feel more capable than ever. And as far as the physicality of it, I feel better at 40 than I did at 25.”

Does it seem like Gwyneth Paltrow flew in and hid behind the curtain and answered the questions while Cameron just moved her mouth? There was a whole lot of GOOP going on there. But I’ll let it slide if she’s really telling us she’ll stop dating douches now that she’s so much more confident in herself.

So who’s talking sh-t – Cameron or Sofia? Or worse, could they both be telling the truth?

In all fairness to Cammy, she never said she liked getting older, she just said she felt better about herself. She’s definitely a glass is half full type of person. Ya there are wrinkles and joint pain and she needs to cut back on the calories since her metabolism is slowing but she’d rather focus on how she’s older and wiser. Cameron’s got a nutritional book coming out soon so she’s working the positive image thing which is totally cool. I buy it on her. She puts in the work. Good for her.

But I LOVE Sofia’s answer. If I was stranded somewhere I would prefer to be stranded with Sofia. In her interview she also said she and her fiance Nick Loeb are “fucking professionals at doing nothing. We like to sit around on the beach and drink wine and talk shit.” Amazing. I would totally do that with her. It reminds me of that perfect line from Steel Magnolias when Olympia Dukakis’ character says, “If you don’t have anything nice to say about anybody, come sit by me.” Freakin’ brilliant.

Anyway, so I guess Sofia Vergara didn’t say Cameron Diaz is full of sh-t. But I like to think if she read Cameron’s Esquire interview she’d be thinking it. Do you believe both women were authentic in their answers or is Cammy D drinking too much of Gwyneth’s GOOPy Kool-Aid?