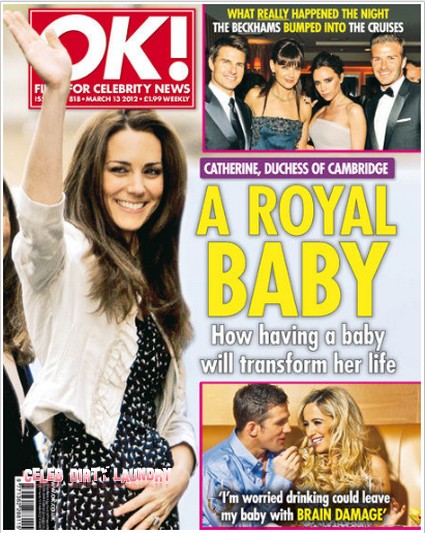 Kate Middleton and Prince William are planning to have a baby that displaces Blue Ivy Carter in the newborn news!  Speculation was that the Duchess of Cambridge and her future king had decided to delay getting pregnant until after all the excitement over the London Olympics and the Queen’s Diamond Jubilee this summer had died down.  But now royal watchers are not so sure about that.  They are speculating that Kate will continue on with her official royal duties until her pregnancy is well advanced.

A source had this to say: “Realistically there is not going to be time for a baby and they have said they are in no hurry. There is no urgent need for an heir – we already have two,” says a source. “William and Kate want to take things in their own good time.”

In November of 2011 there was heavy speculation that Kate was pregnant when she seemed to alter her diet and stopped drinking alcohol.  But those rumors came to nothing.  Since Kate has expressed that Angelina Jolie is her role model we can expect her to have a large brood of kids very soon!

OK Magazine Has This To Say:  WE are desperate to hear royal baby news from these two.  Kate Middleton, the Duchess of Cambridge, and Prince William will soon be celebrating their one year wedding anniversary and they’re yet to reveal the baby news we can’t wait for.

This week OK! takes a look at the pregnancies of Queen Elizabeth II and Princess Diana, and how a royal baby will transform Kate’s life forever.  When she finally does become pregnant, she will surely have her close-knit family heavily involved with helping.

And the beauty has shown she’s not afraid of hard work and will most likely be involved in royal duties up to late pregnancy. So, with Charles and Diana announcing baby news just three months after marrying, Kate and Wills have a lot of catching up to do. And we can’t wait!

No doubt that Kate and William would love to present Great Britain and the world with a healthy baby.  The rules of succession were changed in October 2011 to accommodate the royal couple having a female child. Girls born to members of the Royal Family are to be given equal rights with boys in the succession to the throne as the centuries-old rules of primogeniture being reserved for males were overturned.  This means specifically that if the Duke and Duchess of Cambridge’s first child is a girl, then she will take precedence over any younger brothers in line to be the monarch.  For example, if Queen Elizabeth II had a brother, even if he were younger than her, then he would have been king.

Would you like to see Kate and William have a baby?  Can you think of any appropriate names if the child is female?  Male?  Let us know in the comments below.