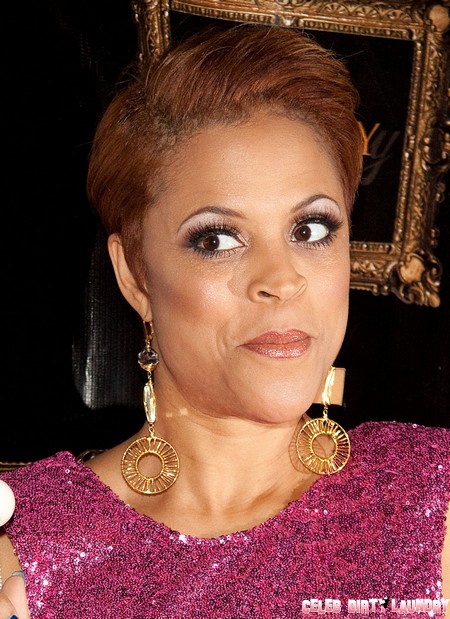 Shaunie O’Neil may have struck gold for the next season of Basketball Wives LA. We told you a few weeks ago that four of the current cast members have been let go because the current season is one hell of a snoozer. These chicks are either boring or else I get the impression they are purposely fighting over nonsense just because the cameras are rolling and they know they better make something good happen quick. It feels staged and after most of the crap goes down I’m still not sure why a fight erupted.

As the producer, Shaunie knew she better get someone interesting onscreen fast or this show isn’t coming back and it looks like she wasn’t messing around with casting this time around.  According to our sources MTV is in final talks with Karrine “Superhead” Steffans.  She is the video vixen that partied and screwed her way to the top of the hip hop ranks and was connected to everyone from R. Kelly to LL Cool J.

Once she cleaned up her act and laid off the booze, Karrine blew the whistle on the industries awful treatment of women and has gone on to be a New York Time’s best selling author.  A source close to the MTV show told MediaTakeOut,

Karrine was not initially interested, but when they came correct with the right money [and are allowing] her to promote her next book, the offer was tough to turn down.”

Oh how I hope this is true!  The majority of the women cast end up being former hood rats in expensive clothes. They still model and objectify themselves to make their money and live like they do. The fights between someone like Draya Michele (a rumored cokehead, pole dancer and model for King magazine) and Karrine would be epic!

Would Karrine save this show and pull a whole bunch of new viewers in as well? Tell us your thoughts in the comments below!

Superhead still strutting her stuff but getting paid more