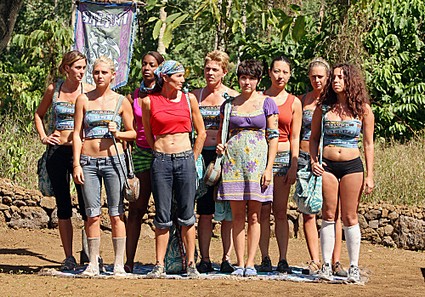 Survivor is back tonight on CBS for a new season and the show has decided to mix it up with an interesting twist.  Survivor One World puts both tribes on the same beach, and opens the door to a whole new evolution of strategic play.  I cannot wait – Survivor is always mixing it up to make the show more interesting.

Survivor has employed the boy vs. girl theme in the past, but never before have they placed them on the same beach. Things might get messy, everyone. We definitely smell some drama on the horizon.  Earlier in the month we introduced you to the guys and gals of survivior. who will be competing.  Check out our guys profiles here and our gals profiles here!

On tonight’s premiere episode it’s a battle of the sexes when tribes are separated into men versus women, but they are in dismay when they learn of a game-changing twist – they must share one beach. Meanwhile, castaways are shocked when a tribe’s true colors are revealed at a competitive immunity challenge.

The fact that all competitors will exist on one beach may seem like no big deal, but it is, as it will make possible connections/alliances/trusts to be formed between opposing teams long before any official mergers take place. Sounds exciting, right?

We will be live blogging tonight’s episode with all the up-to-the-minute details.   So come back at 8PM EST and spend the evening with us.  Make sure to refresh often to get the latest updates!

RECAP: On a remote Polynesian island, 18 contestants are ready to begin the game of a life time. They think they have Survivor figured out, they think they know the rules, but what they don’t know is that they will be separated into two teams on one beach. Who will stay true to their tribe and who will make aliances with the enemy. 39 days, 18 people, 1 survivor.

The tribes are scrambling to take everything off the truck they can that they arrived in. The women discover that the men already stole some stuff from them. Jeff announces that there are no second chances this season, when you are voted out, you go home.

The men are headed to their camp and are finding it tough to haul everything to their camp. The smallest dude on the tribe, Lee, seems to be carrying the biggest load.

Meanwhile, the women are having an equally hard time hauling their loot to their camp. Alicia thinks Kim, herself, Sabrina and Chelsea are the strongest girls on the team.

The tribes arrive at their camps and are shocked that they are both 5-feet apart. The tribes find some chickens and Chelsea catches two of them and the men want one.

Colton has moved over to the women side aleady, he is bonding with all of them and Matt is not liking it and gives Colton a warning. Matt is arrogant and condescending, he has alligned himself with the big boys that have muscles and no brains.

Colton confides in the women and begs them for mercy that if they find an idol, he needs it the most. Sabrina’s gut is telling her to trust Colton. Jay doesn’t think the women’s tribe wants anything do with the men, so he wants them to stay on their side. Sabrina visits the men’s tribe and offers to swap a chicken for someone to go over to the women’s camp to make a fire, but she gets turned down. Troyzan thinks the women are nuts wanting to trade a chicken for fire. The men tell the women that if they get naked, they still won’t give them the fire.

It’s the first night and the women are desperate for fire and try to hit on Michael and Jay to get it, but no luck. Everone is sleeping, Monica and Christina head on over to the men’s camp to steal an ember from their fire, since they stole the axe from them.

It’s morning and the women got their fire, but it didn’t last. Christina headed over to the men’s camp and made a deal with them that will weave for them in trade of them making fire for them. Sabrina went to take a wash and decides to look for the idol, after the second place she looks, she finds it. The idol is not for her, she has to give it up to the Manano tribe.

Colton is back to the women’s team begging for them to help him get an idol. Christina confides in Colton that she found an idol and she has to save one person on the Manano tribe.

It is time for the immunity challenge. On Jeff’s go they will climb a 25 foot tower, they have to jump off into a net, run over to a mat. When all the tribe mates are on the mat they can move to the balance beam where all tribe members have to cross without falling down. Courtney hurt her wrist and medical has to be called and the challenge stopped. Medic tells Jeff that Courtney needs an xray, she may have a broken bone. By default, the men will win the challenge because Courtney cannot continue. Jeff is giving the men the choice of continuing the challenge to see who the winner is, or take their win and immunity.

Back at camp, Colton tells Sabrina that he is the swing vote – she gives him the idol and he’s happy because he wants to oust Matt. The women discuss tribal council and they are thinking of voting out of Courtney. Alicia wants to turn the tables around and get rid of Christina because she is playing both teams against her.

At tribal council, the women have to light their torches which represents their life in the game. Jeff asks Alcia about the first moment when they found out they were going to camp with the men, she tells them she would have preferred not to be with them. Alcia and Christina start getting into a disagreement regarding the trade off to the men, the weaving for the fire. Chelsea tells Jeff that they are not playing as a group and Monica confirms that there is no leader. Jeff gives them an update on Courtney, her wrist is broken in a few places, she is out of the game. The good news, nobody else is going home tonight and they get to go home with fire. Jeff gives them a stern warning before they head out that there is 36 days left and they better start getting along.

That’s it for tonight, next week the women go from bad to worst, they are completely falling apart and the men turn even more against Colton.