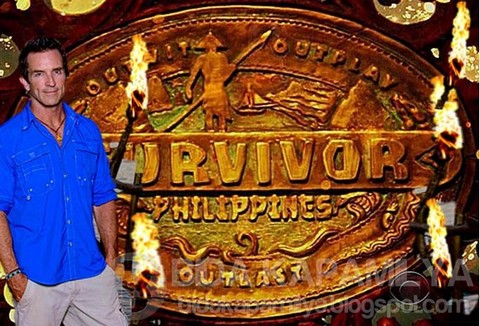 On last week’s 13th episode of Survivor Philippines Season 25 we finally got to see Abi get the long awaited boot that we had all been hoping for. Did you see the episode? If you missed anything, you can read the full and detailed recap HERE.

After 399 tribal councils, tonight we get to see who will win the 25th season. There is a million dollar prize on the line tonight, alliances and tribal friendships left the tribe when Abi did. There are four tribe mates left; Malcolm Freberg, Lisa Whelchel, Denise Stapley and Mike Skupin.

Now Malcolm has played a great game, if he makes it to the final two he will most likely win so that means, he is not a favourite to take to the end.

Lisa will probably be in the final tribal council, it’s just a matter of who will be sitting there beside her.

Denise should be the first to go, she survived being in the worst tribe and has played a brilliant game, but she is tough competition and if the rest are smart, they will get rid of her fast.

Mike hasn’t got a hope of winning, he’s too much of a goofball and is likely to screw something up that causes him to get axed.

A glimpse into tomorrow night’s episode shows the challenge called “The Dragon Slayer” named after Coach, it’s a big obstacle course and the final four players have to pick up puzzle pieces that are part of the dragon as they run along the course. It includes knots and balance beams, sound like a lot of fun.

Rumour has it that Malcolm is the first to go, the next is Mike even though there were some rumours that he actually won the 25th season. It all comes down to Lisa and Denise, Lisa did a good job of keeping her “real” identity a secret, but she may have made a big mistake when she decided to team up with Denise, she should have kept Abi who was hated by almost everyone. The winner and sole Survivor is Denise.

Now if you you are upset that Malcolm didn’t win and want to see more of him, I hear he is heading over to the 26th Survivor Caramoan where you know that we will be covering all the up-to-the minute coverage of the 2013 season.