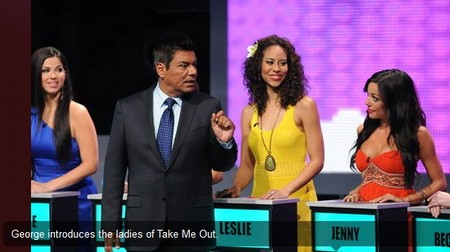 Tonight on FOX is an all new episode of Take Me Out. On tonight’s show 30 single women continue their search for a match. If you missed last week’s show, we have a full and detailed recap here for you.  On last week’s episode where the host of the show is George Lopez.  The show started with 30 single women who were lined up at podiums.

A bachelor was introduced for inspection by each of the women. If they didn’t like the guy, they pressed a button and the light went out on their podium. If she liked him, the light stayed on. The final round was the guy’s choice: he asked a question to two finalists and chooses a winner who he then asked out on a date. After watching the show, yes, yes, it is the ultimate in cheesiness, but will I be watching? Probably, I am a sucker for these show!

So how did Take Me Out do in the ratings?  Well they grabbed 3.3 million total viewers and 1.3 in adults 18-49 demo.  Not earth chattering but probably good enough for summer ratings to keep it around for a couple of weeks.

On tonight’s show the 30 women continue their search for their summer fling on the provocative and hilarious dating show.

RECAP: Here we go again! It’s our second look at Take Me Out, the new dating game hosted by George Lopez. It’s demanding bunch, 30 ladies with a check list of must- have’s for their potential suitors. You remember the drill, if the girl’s don’t like the guy they shut off their light.

Guy number one enters to “You Dropped A Bomb on Me” and looks like a cowboy. No wait, he IS a cowboy named Jesse. 24 lights stay on after round one. In round two he tells us about himself. He is a cowboy and loves country life. He took care of his mom and sisters when his dad passed away. He has manners and seems very genuine. 7 lights remain, 7 potential women to date. Jesse shows off his bull riding skills and ends up with a few interested women.

They are smart.  They see that he respects his mother so he’ll likely respect them.  Jesse decided he favors Ire and Debra and will choose just one of them.. His question to them, “How will you take this bull by the horns?” Debra says she’d take the bull by the horns.  Ire would rather take him by his arms.  Both women will go off into the sunset with him.  He picked Debra for her smile, and well, everything else I’m sure.

Last week Alan and Mackayla went out on a date and now we get to catch up with them.  The Italian hottie has really won Mackayla over and the two are actually happily dating.

Here comes single guy number two, Johnnie chooses “Beautiful People”to make his entrance and the women go crazy.  25 lights stay on for the boxer.  He is always training- 8 hours a day.  Lights are going out like mad and that’s before he mentions how cheap he is.  He likes to take his women out to “specials” to save money.  One light remains on. Nina’s.  Johnnie got knocked out when he revealed he sleeps on an air mattress in the boxing ring!

Samantha and John met last week but he came on a little too strong. The touchy feelyness turned her off.

Panos is single guy number three and he enters to Luck Be a Lady Tonite.  He is from Brooklyn and ends up with 22 lights remaining on at first glance.  He used to be a Wall Street Mogul but quit in favor of writing children’s books.  He can’t wait to have a wife and children of his own.  He is a romantic, old fashioned guy that wants a woman to take care of.  He has six girls to choose from and he decides it’ll be a toss up between Courtni and Leslie.  He wants to know how they’ll surprise him on his birthday.  Courtni will cook him dinner in her apron.  Leslie will distract him with lingerie while food cooks. Panos chooses Courtni.

Our last single guy, Dave, chooses Bad to the Bone as he makes his grand entrance.  He is looking at 24 interested women.  He is a CEO and gym rat, also born deaf in one ear.  Women don’t like men that refer to themselves in the third person, Dave is doomed.  He does have a few date possibilities and I’m sure it’s only because he is kind of hot.  It is between Erin and Kristin and he wants to know what charitable thing they’d do. Erin would clean up the ocean and Kristin would start a charity to empower women.  Kristin wins or at least gets a date with Dave.  Tune in next week to see how these dates play out!