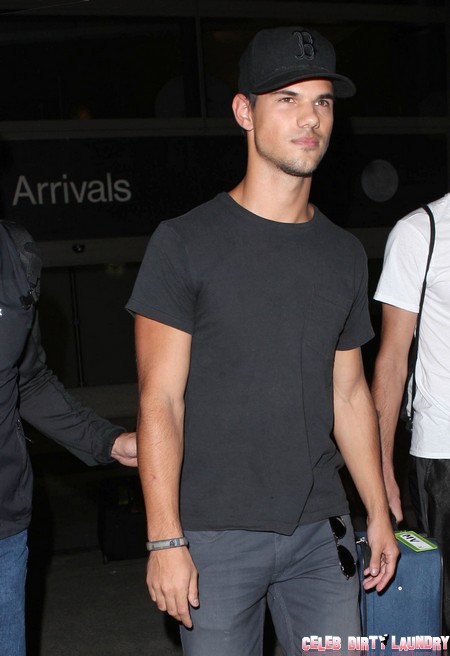 Finally, after a few months of remaining quiet as a mouse regarding the relationship roulette that Kristen Stewart has decided to play, even Taylor Lautner has opted to weigh in on the whole Trampire saga. He was recently grilled on his thoughts about Kristen’s hooking up with her married boss, Rupert Sanders, and then desperately trying to high tail it back to the loving arms of Rob Pattinson. She called what was captured on camera, “a momentary indiscretion” and has publicly begged for Rob to give her the opportunity to fix it all. This was what Taylor divulged,

“To be honest, I’ve never been involved in any of those situations, so I don’t know [if trust can be regained]. It would be just a guess and a shot in the dark, and I don’t want to give that if I haven’t even been there myself. Kristen is fantastic at everything she does. I’m always proud of her.”

Wait, hold up – Taylor is always proud of Kristen. We already know that the two are fairly close and no one else has held back their disgust over her home wrecking hobbies. Perhaps there’s a lot more going on here behind the scenes than we really realize. I mean, Kristen obviously messed up but we all have assumed that she has been in this fabulous relationship with Rob. Perhaps it’s not so great and never really has been.

Maybe friends of the actress, including Taylor have encouraged the actress to move on and while she totally blew it, it also gave her a clear cut “out” if she wanted it. Of course she has since back pedaled, but who knows what really has gone on between Kristen and Rob? Oh yeah, Taylor would have a good idea considering all the hours on the set that he has logged with them over the last four years!  Maybe he is the first to step up and even sideways tell us that this couple that everyone has pulled for is better left on the cutting room floor!

Does Taylor have the inside scoop on Kristen and Rob?  Why is he so proud of Kristen? Tell us your thoughts in the comments below!

Editor’s note: Taylor is disgusted with Kristen just like everyone other than Jodie Foster – she also thinks Mel Gibson, the rapid anti-Semite and misogynist, is a great guy.  But Taylor is under contract with Summit and he ain’t saying sh*t against Kristen.  Breaking Dawn Part 2 signals the Twilight for any honesty on Taylor’s part.