Taylor Swift House Shopping To Live Near Harry Styles – Run Lad, Save Yourself! 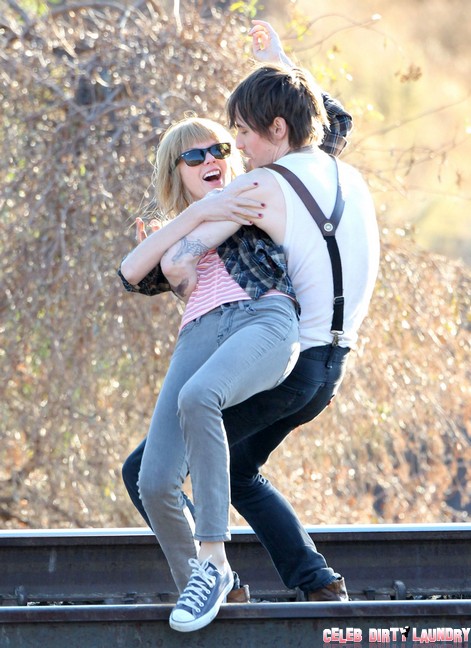 When Taylor Swift first hit the scene she was a sweet teenager writing songs about boys. Fast forward to the Taylor’s third album, Red, and we see that she is really a nut job. Besides writing scathing songs about her ex-boyfriends she now buys houses in their neighborhoods! Another piece of the crazy puzzle is coming together.

Taylor’s latest squeeze is Harry Styles from the British boy band One Direction. TSwizzle, as Perez Hilton calls her, is considering purchasing a home in North London to be near Harry. She doesn’t waste any time! The two have only been dating a couple of weeks. They reconnected during rehearsals for X Factor on November 15. A source tells Hollywood Life that Taylor has been interested in buying a place in the UK for a while. She finally has a reason to take the plunge. But Harry is hesitant to commit to Taylor. They dated this spring for a short time, but Harry being a ladies man didn’t want to date Taylor exclusively. He is so young and has millions of girls fighting over him. Why would he want to commit to one person, especially a woman whose claim to fame is hurting people she once loved with her music? And why would he want to be suffocated by a woman who habitually moves very fast in her relationships? Any guy would be cautious dating Taylor. We will have to see how long this relationship lasts. Taylor is receiving death threats from One Direction fans over her relationship with Harry. Perhaps she is the one who should stay away from him.

Taylor started her new hobby this summer. She bought a house near the Kennedy family vacation home in Hainesport, MA while she was dating 18 year old Connor Kennedy.  The couple broke up not long after Taylor bought the house. Connor being in high school probably wasn’t even thinking about his future with Taylor. It must have freaked him out.  Taylor said she’s not sorry she bought the house. Now the poor kid has to put up with seeing his ex-girlfriend on his family vacations as well as cringing over a horrible break up song about him.

I would love to see Chelsea Handler get her hands on Swifty. Chelsea has a way of getting people to reveal their true selves through brutally honest questioning and disarming the guest with backhanded compliments. Taylor needs to recognize that she has a psychological problem. She is boy crazy but at the same time wants to nest with each guy. Taylor’s actions are the result of insecurity. Her loyal fans think she is a gutsy woman who believes in payback. In reality, she is a source of material for late night talk shows and comedians.